A striking outfit by designer Tiaan Nagel
for his summer 2009 collection. 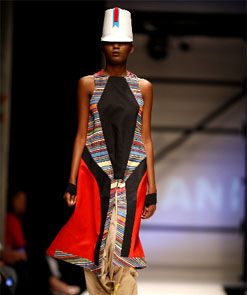 A creation by Anisa Mpungwe, winner of
the 2008 Elle New Talent award. 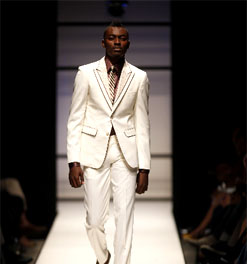 Loincloth & Ashes, De Beers diamonds, velvet lingerie, indigenous craftwork, clothes for Barbie … These were some of the ingredients that went into the sumptuous Sanlam South Africa Fashion Week (SSAFW).

Held in Johannesburg from 16 to 19 September, the event was an opportunity for leading South African designers to showcase their winter 2010 collections to fashion critics, magazine editors, stylists, design students and everyday fashion addicts.

Included in the stellar line up this year were the winners of the 2009 Mercedes Benz Art Award, designers Black Coffee, as well as Gideon, Tiaan Nagel and Lisa Jaffe, Abigail Betz, Clive Rundle, Life and Ephymol, David Tlale, Ruby and the duo who make up Two.

A popular show on the first day was the special collection designed to commemorate the 50th birthday of Barbara Millicent Roberts, more widely know as Barbie.

Thirteen established designers such as David Tlale, Stoned Cherrie and Craig Port were commissioned by the organisers, along with Mattel, the makers of Barbie, to create a classy but fun and whimsical collection in line with the doll’s image.

The top designers were joined by a selected number of design students from the University of Johannesburg’s Department of Fashion Design, whose winning designs were selected to be part of the show.

Since winning the 2008 Elle New Talent award, Mpungwe has been creating a name for herself.

Her label, Loincloth & Ashes, has sold very well at the clothing chain stores of the Mr Price group. She was invited to design a clothing collection for the retailer.

According to Msomi, her Gugulam label is designed to be a brand of clothing that glides with the body.

Speaking of her collection, Mpungwe says her 16-piece Midnight collection combines the elements of “wholesome comedy and creepy horror,” she says.

According to Gugulam’s website, the dresses will fit all the occasions of life “…dresses to sit in, and stand in, and walk in; dresses to dance in, and flirt in, and talk in; dresses in which to do nothing at all; dresses for winter, spring, summer, and autumn.”

Bringing crafts and fashion together

A 2006 partnership formed between SSAFW and the Department of Arts and Culture, the Fashion Fusion Project, once again saw top designers collaborating with crafters from different parts of the country.

The initiative has empowered 900 crafters, and assisted 40 designers to develop collections with a uniquely contemporary “made in South Africa” look and feel.

Another success story which has come out of the Fashion Fusion Project since its inception, is the export of cotton/linen fabric batik, printed by Sizakele, who are a Pretoria based group of crafter for use by a former South African designer who now lives in New York.

A fashion and accessories exhibition comprising 120 stands were on hand to further delight and entice visitors.

This part of the event was primarily aimed at pleasing the finicky tastes of fashion die- hards, who prefer to buy directly from the designers.

Most designers exhibiting their clothes showcased their 2009 summer collections.

A love for fashion

The Sanlam SA Fashion Week is a celebrated annual event that has contributed in launching many designers’ careers in South Africa.

The first event took place inside a large marquee, placed in the middle of what is now known as the Nelson Mandela Square.

At the time, 17 relatively unknown designers showcased their collections and since then, the event has claimed its place as the premier event on the fashion calendar.

Fashion journalists were also recognised for their work during the 2009 Sanlam Fashion Journalism Awards during fashion week.

Each of the finalists in each of the two categories of the awards – fashion writing and fashion editing, were selected by a panel of leading journalists and radio personalities.