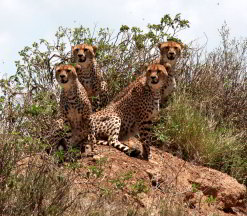 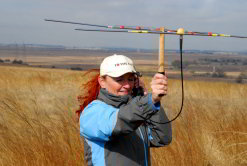 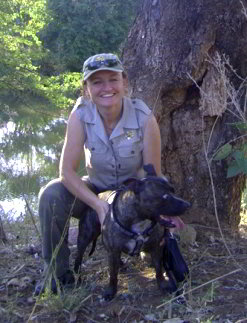 Marnewick with her dog Diesel, who is
trained to sniff out cheetah droppings.

From fitting flappers to alert large birds to the dangers of power lines, to counting South Africa’s cheetah population in the Kruger Park through an ingenious tourist photographic competition, the Endangered Wildlife Trust (EWT) is leaving its mark on nature conservation in the country.

With 38 years of hands-on conservation experience in Southern Africa, the small NGO has projects on the go in all nine South African provinces as well as in Kenya, Botswana and Uganda. It is also currently collaborating on projects with countries such as Tanzania, Namibia and Sudan.

After so many years the EWT’s main focus continues to be the initiation and maintenance of on-the-ground conservation research and activities.

EWT specialists are deployed throughout Southern Africa to engage in applied fieldwork, research and communication with relevant parties. One such specialist is Kelly Marnewick, the EWT’s manager for carnivore conservation.

Tracking South Africa’s most elusive big cat, the cheetah, is her passion. She is now busy with her doctorate which focuses on cheetah living outside protected areas, and plans to use her research to determine the status, range use and habitat selection of these animals.

In the end, she hopes to come up with a better conservation plan for the magnificent cats, which are listed as vulnerable on the Red List of the International Union for Conservation of Nature (IUCN), in future.

“We really know almost nothing about these animals. There is limited data available on cheetah.”

Marnewick has been tracking cheetah with her sniffer dog Diesel for many years now and with her contagious enthusiasm for wildlife, has been instrumental in changing the attitudes of farmers in the areas where she works. Some farmers view wild animals such as the cheetah as vermin, and will readily destroy them either in retaliation for livestock theft, or in anticipation of the killing of livestock.

Cheetah are elusive creatures, roaming over large tracts of land in order to avoid confrontation with their arch enemies, lion and hyena – in protected reserves these two predators are responsible for most cheetah deaths.

Marnewick tracked a cheetah over a remarkable range of 1 500 square kilometres.

“Cheetah do not recognise international boundaries and this means that our conservation planning also needs to break down boundaries,” she said.

A long-term goal for the EWT is to increase the number of free-roaming cheetah in South Africa.

These areas have several small reserves with cheetah reintroduced, and the long term plan is to develop mechanisms where the animals can move freely between these reserves and negate the need for intensive management of their populations, said Marnewick.

The Kruger National Park in Mpumalanga is home to the country’s only unmanaged, viable cheetah population. Established in 1898 to protect the wildlife of the South African lowveld, this world-famous reserve of nearly two-million hectares is one of the country’s top tourist destinations and home to the Big Five – lion, leopard, rhino, elephant and buffalo.

Every five years the EWT holds a cheetah tourist photographic survey to establish population numbers in the park. The results of the last survey, conducted in 2008/2009, revealed that the park has an estimated 400 of these mammals.

This is a healthy number for cheetah, confirmed Marnewick, “but we are not going to sit back and relax.”

Complimenting Marnewick’s research, the EWT recently appointed Vincent van der Merwe as a fulltime project coordinator to focus exclusively on cheetah in small fenced protected areas. In South Africa, cheetah have been reintroduced into 37 reserves and a population of approximately 280 cats now occurs in fragmented subpopulations.

“The need to manage these fragmented populations as a meta-population was identified as a key conservation issue at a habitat viability assessment workshop for cheetahs in South Africa,” said Marnewick.

In addition, Van der Merwe will also build up a national DNA database for the species over time.

Marnewick warned that the reintroduction of cheetah into small fenced areas in the long run is not a good option for the survival of the species, because it leads to gene pool deterioration.

The best option is to come up with creative conservation efforts. Both cheetah and wild dogs have the ability to survive and breed in human-dominated landscapes under the right circumstances.

Whether captive or free-roaming, the cheetah faces many challenges. About 80 animals are killed each year through incidents such as road deaths, snares, hunting and habitat destruction.

Intelligent animals, these cats also make fantastic pets, said Marnewick. As a result, the legal and illegal trade in live animals is making a huge dent in populations.

To address the trade threats to leopard and cheetah, the EWT’s Carnivore Conservation Programme, in conjunction with the South African National Biodiversity Institute (Sanbi), is implementing a project to assess the scale and impact of consumptive utilisation of leopard and cheetah, and their body parts.

Marnewick says the EWT will continue to work closely with all concerned parties including the government, NGOs and other industry members.

“We want to ensure that trade in these two species is managed in a sustainable way and that the populations of these key species in South Africa thrive.”

And then there is the conflict with landowners. The largest part of South Africa’s cheetah population occurs outside protected areas on privately owned cattle and wildlife ranches. Marnewick has found over the years that the only way to change perceptions among farmers about cheetah is to support the information with “hard facts”.

But she has also found that in general there is more tolerance to carnivores on farmlands than before.

The EWT also has the weight of major international conservation agencies behind its efforts.

In 2006 the IUCN’s Cat and Canid Specialist Groups, in partnership with the Wildlife Conservation Society and the Zoological Society of London, initiated a rangewide conservation planning process for wild dogs and cheetah.

Conservation groups put wild dogs and cheetah together because they have similar needs and face similar threats.

Three regions were defined to assist in this process: East Africa, Southern Africa and North and West Africa. The EWT is the country partner for the Southern African region.

“This means that our work, as defined in the South African national action plan, is supported through this regional project,” said Marnewick. “It holds a lot of respect due to the affiliation with the IUCN and the experienced, respected people who head up the process.”

EWT fundraising and marketing manager Vanessa Bezuidenhout added: “I think it is time that we in South Africa realise what we have and what we stand to lose.”