Scientists believe that the Sterkfontein
Caves at the Cradle of Humankind are
critical for the understanding of the
history of human development.
(Image: www.amtravelimages.com) 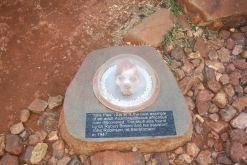 Local World Heritage site, The Cradle of Humankind, has been ranked as one of the top 12 evotourism destinations in the world, making it the only site in sub-Saharan Africa to have made the list.

Evotourism is a new term, coined by The Smithsonian, to describe travel intended to promote awareness of evolution.

The publication’s Evotourism initiative functions as a travel information service to direct tourists to places and discoveries that have evolutionary significance.

As part of the initiative, 12 world-class must-see Evotourism destinations were identified. Every site on the list was selected independently.

According to Charles Kimberlin Brain, a South African palaeontologist and curator emeritus at the Ditsong National Museum of Natural History (formerly known as the Transvaal Museum), South African caves have played a major role in the development of the world’s understanding of human evolution.

Being listed as one of the top 12 Evotourism destinations in the world is a great honour for South Africa. It also highlights the country’s contribution to research in the field of evolution.

The Cradle of Humankind, which was declared a world heritage site by Unesco in 1999, is one of eight World Heritage sites in South Africa, and the only one in Gauteng province.

Tony Rubin, MD of Maropeng, the visitors’ centre situated in the Cradle of Humankind, says the listing has given Maropeng great international exposure.

“It has highlighted the importance of the Cradle of Humankind’s fossil record and what it tells us about our evolution,” Ruben says. “I believe we have a unique and world-class interpretation centre at Maropeng.”

The Sterkfontein Caves, also situated in the Cradle of Humankind, are believed to have produced more than a third of all early hominid fossils ever found.

Scientists believe that these finds, along with other important archaeological discoveries at the Sterkfontein caves, are critical for the understanding of the history of human development.

In recent years, Rubin has noticed that travellers are showing more interest in heritage, sustainability and evolution.

Initiatives such as the Evotourism listing play an important part in encouraging people to be curious about evolution.

“Listings such as these help to teach the general public about our past and the planet as a whole, thereby creating more interest in visiting places such as Maropeng,” he says.

“Since Maropeng’s opening, I believe the public is far more informed about our palaeo-heritage, and constantly expresses an interest to know and find out more.”

Other Evotourism sites in the listing include: Kangeroo Island in Australia; the Foraminifera Sculpture Park min China; Isle Royale in Michigan; Valley of the Whales in Egypt; the Galápagos Islands in Ecuador; Mount St. Helens in Washington; England’s Jurassic Coast; Mendel’s Garden in the Czech Republic; Ashfall Fossil Beds in Nebraska; the La Brea Tar Pits in California and The Burgess Shale, a crumbling slope in Canada’s Rocky Mountains.