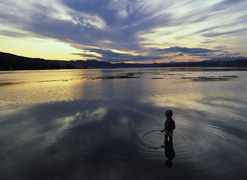 Every year the month of July sees crowds flocking to the Western Cape seaside town of Knysna for its big annual party – the Knysna Oyster Festival. Now in its 26th year, the event has a host of activities that draw visitors from across South Africa and beyond.

Other than the oyster eating and champagne drinking, there’s the Knysna Cycle Tour, held over the first weekend, and the Pick n Pay Cape Times Forest Marathon, the grand finale. The week in between is full of other sporting events, a whisky and jazz festival, gastronomic delights and adventures for the kids – including the chance to go tobogganing and snow boarding on a real snow slope.

But whether you’re a first-timer or a festival veteran, there are a number of other options that let you see the best of Knysna – without the crowds.

Knysna is famous for its oysters, and there’s no better way to enjoy them than with a little DIY. Take a picnic and an oyster knife down to the beach at Buffalo Bay on a spring low tide and try your hand at harvesting wild oysters off the rocks. It’s a rare treat, not only because the wild oyster tastes so different from the cultivated variety, but also because slurping down molluscs you’ve extracted yourself is much more rewarding than sitting down to a plate of prepared oysters, even at the town’s famous 34 South restaurant.

That’s not the only reason they taste so good: the cultivated oyster (Crassotrea gicas) is grown all over the world but the wild oyster (Crassotea margaritacea) is a subspecies unique to this stretch of coastline, so it has its own distinctive taste.

If you’re worried that encouraging people to go and collect their own oysters might lead to the supply being depleted, rest assured that controls are in place. Individuals can buy permits to harvest 25 oysters per person per day. And once you try collecting that number you’ll realise it’s no easy task. But it is an excuse to enjoy a fun afternoon in the sun.

Another unusual new attraction is Eagle Encounters, which opened in December 2008 and is linked to the Eagle Encounters at Spier in Cape Town. Dennis Robson, who runs the project, is a falconer who takes injured or maltreated birds and tries to rehabilitate them through training and exercise programmes. Some birds have been raised by humans and have never hunted, and so can never be released.

Robson demonstrates with a barn owl, which “talks” non-stop.

“It’s a human imprint,” he explains. “It’s used to the chattering of humans so mimics them.”

Many of the birds in the sanctuary are victims of road accidents, while others have been illegally kept as pets in tiny cages so have lost the ability to fly properly. Amazingly roughly 60% of the birds are rehabilitated.

The birds show of their aerial manoeuvres at twice-daily shows, but visitors are welcome to come in and see the birds during the centre opening hours and Dennis will always do his best to put a few through their flying paces.

Another must-do is a visit to the Knysna Elephant Park. Started as an elephant orphanage in 1994, it has since grown into a tourist attraction – although the emphasis is still on letting the elephants be themselves without too much human interference.

There are various options for interaction. You can go for an early morning walk with the herd or sign up for one of the half-hourly tours. The tour includes an introduction to the rehabilitation work being carried out and some tips on elephant etiquette. Then you’re driven out to the matriarchal group, where you can enjoy the gentle touch of the tuskers’ trunks as you feed them grapes, stroke the gentle giants and watch the young calves being fed.

Or you can sign up for a ride on a jumbo – the young bull elephants need exercise, so elephant rides were introduced as a logical response to popular demand. But the best way to appreciate this herd is to book in for an overnight visit. At night the behemoths are stabled in a big barn overlooked by the guesthouse, so you can enjoy the odours and sounds of the elephants from your room or the open lounge area. You might not get much sleep with all the crashing around but looking out from the sofa at elephants right below you is quite something.

One of the great attractions of the stay is that you can join the rangers and walk back to the guesthouse with the herd once the day-trippers have gone and enjoy their first steps into the light of day in the morning.

Of course first prize would be to come across one of the pachyderms on one of the many hiking or mountain biking trails through the indigenous forest, but your chances of spotting them in the wild are remote. They are occasionally seen – the Knysna forest is the largest unfenced elephant habitat in South Africa – but no one is sure how many wild elephant remain. South African National Parks scientists have photographed one female several times, while DNA studies on elephant spoor suggest that as many as five animals roam free.

If you fancy exploring the Knysna forest, Tony Cook of Mountain Biking Africa will show you the top rides and hikes in the area – one of the best areas for mountain biking in the whole of South Africa. There’s plenty of dirt and single track around Knysna as well as a new ride at Buffalo Hills just outside Plettenberg Bay, where you can ride past herds of zebra, eland, wildebeest, giraffe and other plains game.

The perfect way to work up an appetite for some oysters and champagne!