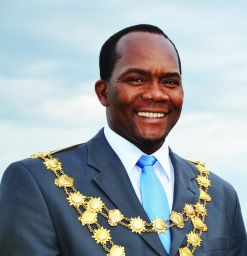 Durban mayor, James Nxumalo believes it is a fantastic achievement for Durban, to be positioned amongst other leading global cities of the world. 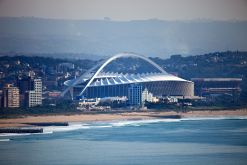 The Moses Mabhiba stadium with its distinctive arch that has reshaped Durban’s skyline.
(Images: Durban Tourism)

Durban is a natural paradise, known for its lovely beaches and subtropical climate. Now, its many treasures have seen it nominated as a New7Wonder City.

It pits its considerable charms against metropolises such as romance capital Paris, frenetic New York and the neon fantasy of Tokyo.

Durban is the largest city in KwaZulu-Natal in South Africa. It is part of the eThekwini metropolitan municipality, created in 2000, which includes Durban and surrounding towns. eThekwini in Zulu means “bay or lagoon”.

“To be positioned amongst other leading global cities of the world, proudly shows the commitment and competitive edge of our city as a leading tourism, events and business destination,” says Durban mayor, James Nxumalo.

He said the achievement was a great honour. “The city is built around one of the busiest ports in Africa and our people are our pride. We have recently been voted as the friendliest city in South Africa and this is partly due to our rich cultural diversity that includes a rich tapestry of African, eastern and western Influences.”

Established in 2001 by the Swiss-born Canadian filmmaker, author and adventurer, Bernard Weber, the New7Wonders Foundation aims to promote protecting the world’s human-built and natural heritage and to foster respect for the planet’s diversity. The initiative kicked off with the New7Wonders of the World, choosing from a selection of 200 existing monuments.

Its latest venture, the New7Wonders Cities, announced its 28 official finalists on Monday 21 October, with Durban making a splash.

“The competition highlights the move toward mass urbanisation as the Earth’s population grows. According to the UN (United Nations), population growth will exceed 10-billion by 2083, and most [of these people] will be in cities.

“Dramatic urbanisation is radically changing the social, economic and environmental landscape of our planet. Our world has entered an urban era where cities are defining the future of humanity,” says Eamonn Fitzgerald, head of communication at New7Wonders.

Durban’s lauded attractions include the Moses Mabhida stadium, which hosted Fifa 2010 World Cup matches; uShaka Marine World, one of the largest aquariums in the world; and the International Convention Centre (ICC) – the leading conference centre in Africa. The city is also a gateway to national parks and historic sites; Kwa-Zulu – home of the amaZulu (the people of heaven) – and the Drakensberg mountain range.

“The City of Durban is an elegant, mature and ambitious city. It is a trendsetter in offering great lifestyle, speckled with adventure activities, blessed with natural beauty and is an astonishingly liveable city,” says Phillip Sithole, head of Durban Tourism.

He adds, “As a visitor, you are faced with the perfect ingredients to make your holiday unique and special. Whether you here as a business delegate or a leisure traveller there is something special that will capture your heart forever.”

eThekwini municipality councillor, Rick Crouch, says, “This is great for Durban and we as Durbanites should be proud that we were even nominated. We have a great city here and the world at large should know it. All Durbanites should be encouraged to vote and support Durban, the vacation capital of South Africa.”

The city was also ranked ahead of Johannesburg and Cape Town as the country’s friendliest capital in the 2013 Anholt-GfK Roper City Brand Index™, which assesses 50 cities annually.

A city at its best

Weber praised the diversity of the finalist cities as “extraordinarily stimulating as regards the past, present and future of urban life”.

He says the remarkable New7Wonders Cities long list reflects the energy and culture of a city at its best.

“United in their commonalties, and varied in their forms, cities remind us of the possibilities of civilization when, for the first time in history, more than half of the world’s population live in cities.”

He hopes that the New7Wonders Cities campaign will generate debate about the challenges cities face and how they are responding to them.

The official New7Wonders Cities will be revealed on 7 December 2014.