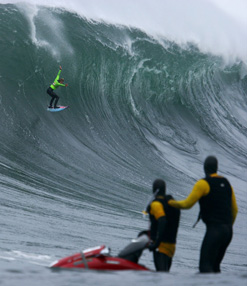 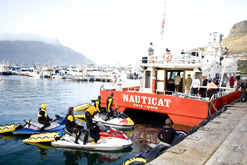 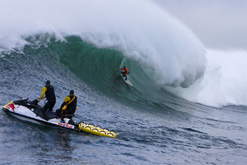 If you were a student in the early 1980s, you probably played that fabulous precursor to computer games and play stations, Dungeons and Dragons, a game of strategy and foresight. There was an element of chance, of course, with the roll of the dice determining how successful any particular endeavour would be. But experience, knowledge, skill and planning weighed heavier than the hand of fate.

I couldn’t get the game out of my mind when I was chatting to Grant Spooner, the water safety coordinator of the Red Bull Big Wave Africa (BWA). His business is pretty varied, ranging from tourist charters to providing boats, filming platforms and safety services for the film industry, but BWA is possibly the highlight of his year.

BWA is held every August at Dungeons, near Hout Bay in South Africa’s beautiful city of Cape Town. During the competition, and the practice sessions leading up to it, local and international surfers ride some of the biggest waves in the world. Huge swells come sweeping in from the Antarctic and, when they meet the underwater topography that makes Dungeons the formidable break it is, they rear up into immense dragon-shaped monsters capable of devouring a human with one bite. And – speaking of bites – other huge, sleek, grey monsters lurk in the depths of the channel between the break and Seal Island. So planning and orchestrating the safety of the event is much like a game of Dungeons and Dragons.

The logistics are astounding. First you have to set out the board. (Okay, BWA is not a board game, but let’s stretch the metaphor a little.) Spooner has a plan diagram of the Dungeons area, outlining what goes where – and there’s lots of traffic out there on the day.

The first line of defence is a buoy line beyond which no public boats may go. Between there and the break are other designated zones. The biggest boat out there on the day is the Nauticat, a 22-metre steel catamaran charter boat carrying the competition judges and some of the press, and also serves as a base for the surfers between heats. Then there are two police boats, which are used mainly to enforce the no-go zone for the public. A South African National Parks boat is on hand to keep an eye on things, as the competition is held in a marine protected area. Press photographers float in three eight-metre rigid inflatable boats just outside the impact zone, each in a dedicated area of operation to prevent collision if they all need to take evasive action at once. A jet ski is dedicated to an in-water videographer.

Three National Sea Rescue Institute boats are on hand for emergencies, but are only one small part of the rescue setup. Two medical boats, each with a doctor, a paramedic and comprehensive first response equipment, are moored in safe places close to the action. And a doctor, paramedic and ambulance are on standby on shore. That makes three doctors and three paramedics.

Four jet skis form the heart of the rescue team right in the surf zone. Each tows a rescue sled with straps and handles so it can be used to ferry surfers to and fro, or to transport an unconscious person. Three of the jet skis carry fully outfitted rescue swimmers, who ride pillion behind the pilot, and are ready to jump into the water the moment there is an emergency. It seems glamorous – and it must be a blast zipping around on those enormous waves – but the job requires some serious training, and each crew member is a big-wave surfer in his own right.

The make-up of the water-safety team has changed little over the years, and they are as much a part of the brotherhood of big-wave surfers as of the competitors. That may sound a tad sexist, but all the jet ski pilots and rescue swimmers are men – although they were trained by a woman. Shaun Alladio, one of the most accomplished water safety specialists in the world, trained the rescue team and helped set up the safety system in 2000. It’s evolved since then, and she is on record as saying that BWA is now the “most formalised surfing event in the world in terms of marine safety”.

So the groundwork has been laid, the plan is in place, and the waiting begins. The skippers know exactly where and how to operate. The doctors and paramedics are on standby. The press photographers are champing at the bit, and the surfers are psyching themselves up for the big, big waves. Some years the wait has seemed interminable, and some years it was – with the reef just not producing waves big enough to hold the competition. But 2008 was a good year.

On the second day of the window period, big swells swept in from the Southern Ocean. Each wave different – some big, some not so big, some very big, some just enormous. And as the dragons reared up and charged in towards the Sentinel, the players made their moves. Surfers chose to paddle into a wave, or to take the safer route over the back, press boat skippers moved in to give their passengers the perfect shot, and the sleek, grey, cold-eyed dragons patrolled the murky, eponymous, kelp-filled dungeons below the thundering breakers.

The water safety crew were there, ferrying the surfers to and from the Nauticat, zipping to a vantage spot to watch the wave break, see who rode it and be there to pick up the pieces. Hopefully just two pieces – one surfer and one board. They worked hard, and the inevitable incidents included one concussion, one burst eardrum and one dislocated shoulder, which could all have had very serious repercussions if the crew had not been there to get the victims out of the danger zone. In the dark, cold, lonely dungeons the kelp wraps itself around your legs and the heaving Atlantic pummels you into the reef. And the sleek, grey dragons patrol …

Spooner was working at full revs, fuelled by an almost constant feed of adrenaline. Each wave was a roll of the dice, and he had no way of predicting which way it would fall. A wipeout, a dragon-bite (surfers never, ever say the word sh**k), a near-drowning? He’s got a plan for all of them. About the only thing he hasn’t got one for is axe-throwing dwarves. Gee, Dorothy, I don’t think we’re in the 1980s any more.