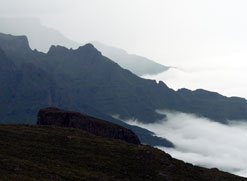 The Zulu name for the Drakensberg,
uKhahlamba, means “barrier of spears”. 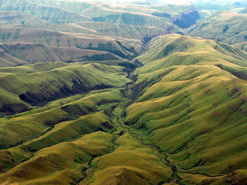 The precipitous basalt cliffs of the
escarpment drop straight down from the
flat plateau while tumbling waterfalls pitch
onto the lower slopes, cutting out deep
valleys separated by dramatic green
ridges.
(Images: Mary Alexander,
MediaClubSouthAfrica.com. For more free
photos, visit the image library.)

I’ve hiked many of the world’s best trails: the Annapurna Circuit and well-trodden path to Everest Base Camp, the Milford Track, the Inca Trail and the classic alpine Haute Route from Chamonix to Mont Blanc. But I rate the Drakensberg Traverse as one of the finest of them all.

The uKhahlamba-Drakensberg Park has many marked trails on its lower slopes, but once up on the mountain you’re in the wilderness. And what a magnificent wilderness it is. The precipitous basalt cliffs of the escarpment drop straight down from the flat plateau while tumbling waterfalls pitch onto the lower slopes, cutting out deep valleys separated by dramatic green ridges.

Hiking the length of the Berg, from the dramatic Sentinel Buttress in the north of the range to Bushman’s Nek in the south, is no mean undertaking. You need to strong, fit and well-prepared, but there are shorter options, one of the most popular being the five-day Sentinel to Cathedral Peak circuit.

Apart from a few well-used steep passes that give access to the plateau, there are no paths and only a few difficult-to-locate caves as shelter, but if you’re an experienced hiker, or go with a guide, the Drakensberg Plateau is a pristine, rugged wonderland that you could spend weeks exploring.

Most groups allow 10 or 11 days to complete the traverse, but as with so many hikes it’s a trade off – the more food you carry, the slower you go. When I did it we opted to go fast and light, taking only a week’s food.

Not that we could go too light, given the altitude and the unpredictable Berg weather. Massive daily electrical storms are the norm in summer, and snow and blizzards happen throughout the year, so full wet/cold weather gear – including a lightweight four-season mountain tent and sleeping bag – are essential.

The trailhead is the Sentinel car park, accessed by a good road from the Free State town of Qwa Qwa. Once you’ve signed the mountain register and paid a paltry sum for park entry you head out on the obvious trail up towards the great golden wall of the Sentinel.

Other than by driving up the Sani Pass in the southern Berg, this is the only easy way up to the plateau.

After contouring around the base of the sheer cliffs you find yourself in a gully, where two sets of chain ladders allow you to scale the impossibly steep rock band. They’re not for the vertically challenged, but if you steel your nerves and keep looking up you’ll be on the top in minutes.

The summit of Mont aux Sources a couple of hours up the valley is a popular option with day trippers. It’s also the first peak you’ll bag on your journey, but before heading off take time to enjoy the incredible vistas. Hike to the edge of the Eastern Buttress for a bird’s-eye view of the famous Amphitheatre and follow the Thukela River to where it tumbles off the edge in a spectacular waterfall down to the valley a kilometre below.

Once you’ve summitted Mont aux Sources – a somewhat anticlimactic event as the peak is really only a pimple on the raised plateau – head south to find a campsite. Take it easy – the air is thin at 3 000 metres and, until you acclimatise to the altitude and lack of oxygen, you’ll find any exertion, even sleeping, difficult.

This northern section is the wildest, most spectacular part of the Berg – a hostile, jagged land of deep valleys and steep ridges. Often you’re above the clouds and the early morning mist rising from the plains below gives the mountains an eerie, isolated feel.

The distinctive shapes of the free-standing peaks poke through the layer of white that obscures the valleys below – the Rockeries, Mweni Needles, Cathedral Peak, the Pyramid, Bell and Devil’s Tooth. The Zulu name for the Drakensberg, uKhahlamba, means “barrier of spears” – and from this vantage it’s easy to see why.

You look down on soaring  bearded vultures, pick out splashes of colourful flowers in the grass and occasionally catch a glimpse of a buck disappearing up a rocky slope. If the weather holds, the evening skies are studded with stars. It’s a magical place.

Most hikers are content to head down the Tseketseke Pass to the Cathedral Peak Hotel, but if you have the time and energy carry on, over Cleft Peak and on to the fortress-like outcrop of Mafadi, South Africa’s highest point, which straddles the border with Lesotho.

The quickest way south from here is through Lesotho, where the landscape changes dramatically. For the first time you’ll see other people – shepherds wrapped in blankets minding their sheep. At night they return, with their flocks and dogs, to their kraals and stone huts; at dawn you hear the sound of bells again as they take the animals back out to pasture.

The biggest shock is when you cross the road leading up from the top of Sani Pass and see houses, metal sheds and the odd car for the first time in a week, but once you’re over the road you’re back in the wilderness.

The southern part of the Berg, with its carpets of pretty flowers, green rounded hills and herds of sheep and cattle, is more welcoming than the north, so by the time the hike is over and you’ve found the unmarked route down to Bushman’s Nek you’ve been gently reintegrated into lowland life.

There are various other easily accessible peaks, such as Champagne Castle, Giants Castle and Thabana Ntleyana, the highest point in southern Africa, to bag along the way. I’d thoroughly recommend these short detours from the most direct route for the views and sheer exhilaration of standing on top of the magnificent peaks.

A traverse of the Drakensberg is an adventure you’ll remember all your life. So savour the moment, smell the flowers, look at the dramatic rocks and explore the caves and overhangs for rock art. You’ll soon appreciate why the uKhahlamba-Drakensberg is a Unesco World Heritage Site, and will long to return.

Peak High Mountaineering offer the full traverse of the Dragon’s Back and other guided hikes in the Drakensberg. Phone +27 33 343 3168, email gavin@peakhigh.co.za or visit www.peakhigh.co.za.