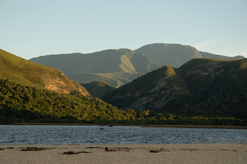 Western Cape premier Helen Zille has unveiled a new multimillion-rand development on South Africa’s Garden Route which is expected to turn the region into a major global tourism and business hub.

Known as the Destiny Africa ecosphere project, the US$3.7-billion (R28-billion) initiative will stand on 437 hectares just outside the town of George, located at the eastern end of the Western Cape province and in the centre of the Garden Route. The popular Garden Route spans roughly 200km of South Africa’s southern coast.

George, the sixth-oldest town in South Africa, is known as the business centre of the region and is a sought-after conference and holiday destination. The town already has essential infrastructure in place, including an airport, but has tremendous potential for large-scale development.

The Destiny Africa project will combine business, learning and leisure into a so-called smart city. Components include a top-class conference centre, a business park with an incubator, a university cluster and research centre, about 7 000 residential units, ecotourism and medical tourism facilities, retail opportunities and a waterfront. These interconnected facilities are known as an ecosphere.

Destiny Africa is expected to contribute significantly to South Africa’s economy in the same way as California’s Silicon Valley, India’s information technology hub of Hyderabad, or Singapore. These regions have used the smart city concept to drive economic growth by attracting foreign investment as well as the world’s top specialists and entrepreneurs.

Destiny Africa is a private venture steered by Destiny Africa Investment Holdings (DAIH), a company that was set up especially to drive the project.

Construction could take up to 17 years and will result in at least 50 000 new jobs, both directly and indirectly. And this is a conservative estimate, said DAIH director Thys Pretorius, with the nearby communities of Thembalethu and Pacaltsdorp benefiting most of all.

The project centres on the Mice concept – meetings, incentives, conferences and expositions – which forms the core of sustainable business tourism. This sector of the tourism industry is growing globally and South Africa is no exception. The country’s many attractions and top venues helped it to reach number 35 on the International Congress and Convention Association’s global ranking for 2007.

However, said Pretorius, only 5% of South Africa’s annual $2.8-billion (R21-billion) Mice revenue comes from overseas. He said that Destiny Africa, with its multi-faceted offerings, would help to open up all the opportunities that are currently not exploited.

Pretorius said that Destiny Africa aimed to become the continent’s most sought-after Mice destination. At the same time it would promote the Garden Route, most of which lies within the Cape Floral Kingdom, as a superior eco-tourism region.

He also anticipated a reversal in the trend of skilled workers leaving the country, saying that the smart city would attract smart people and smart business.

The first element to be built, according to DAIH, will be the conference and exhibition centre.

For its small area, the Garden Route is the most bio-diverse region in the world. It is said that only the rainforests hold more biodiversity, although they are spread over a much larger area.

Government is currently in the process of establishing a new national park there to encompass notable features such as the current Wilderness and Tsitsikamma national parks, the fynbos of the Cape Floral Kingdom, marine and aquatic systems and the largest continuous stretch of indigenous forest in the country.

George is a historically significant location, with features such as the 198-year-old Old Slave Tree, which is a national monument. This huge oak tree is so named because of the chain and lock embedded near the bottom of its trunk. It is not certain if the chain is linked to slavery, or was used merely to prevent things from being stolen.

Originally a timber town, George was established in 1776 by the Dutch East India Company as an outpost. The town fell into the Swellendam magisterial district but was separated from it in 1806. In 1811 the town was officially proclaimed by then governor of the Cape, the Earl of Caledon, and named after George III, the reigning British monarch.

George is twinned with Tacoma in Washington, US, and Fuzhou in China.