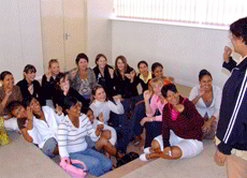 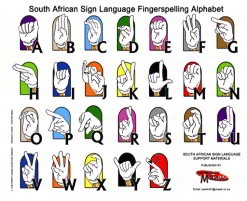 The use of South African sign language
is enshrined in the Constitution.
(Image: Deafsa)

The World Congress of the World Federation of the Deaf takes place every four years at different locations around the world, and in 2011 it comes to Africa under the theme Global Deaf Renaissance.

The event takes place at Durban’s acclaimed International Convention Centres from 18 to 24 July.

The congress aims to bring people together to exchange information and information, and to promote equality and wellbeing for deaf people.

It’s also a cultural event which allows people from all over the world to discuss ideas that affect them as part of the global deaf community. These conversations allow them to identify with similar problems experienced by deaf people, wherever they are.

The congress’s opening coincides with International Mandela Day, and on that day deaf people around the world will receive a call to take responsibility for improving their surroundings and communities.

Topics up for discussion include bilingual learning; achieving legal recognition of sign language; social and economic empowerment; mentoring of sign language interpreters; and many others.

Besides the general deaf community, special deaf groups such as the elderly, gays and lesbians, and deaf-blind people also have topics devoted to their interests.

The youth camp takes place at the Protea Hotel Karridene, south of Durban, from 6 to 14 July. With the theme Deaf Youth Renaissance, its main objectives are similar to those of the congress – to give young deaf people between the ages of 18 and 30 the opportunity to discuss areas of concern; network and build relationships; and develop their leadership skills.

Equal rights for all

The World Federation of the Deaf (WFD) was established as an NGO in Italy in 1951. The organisation currently has member associations from 130 countries, as well as a number of individual members.

WFD holds a general assembly every four years in conjunction with the world congress.

South Africa’s Deaf Federation is a national organisation that represents the country’s roughly 600 000-strong deaf community and the 1.4-million who are hard of hearing.

The organisation is committed to promoting and preserving South African sign language as the language of the deaf community in South Africa.

Although South African sign language is not yet recognised as an official language, it is accepted as the official medium of instruction for deaf pupils under a number of legal instruments including the 1996 Bill of Rights and the South African Schools Act of the same year. Its importance is recognised by the country’s Constitution.

Among its goals, Deafsa upholds the rights of deaf people, especially in dealings with government departments and decision-making bodies. It also conducts research and shares relevant information and as well as raising awareness amongst the general community of issues relating to deaf people, the organisation  educates the deaf about their own rights.

Formerly known as the South African National Council for the Deaf, Deafsa was founded in 1929 and changed to its new name in 1995. According to the organisation, about 80% of its national executive committee is deaf.

New hope for the deaf in SA – MediaClubSouthAfrica.com