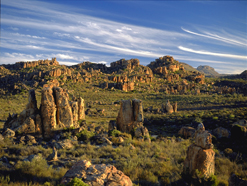 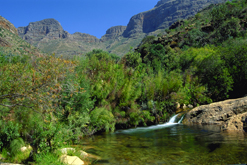 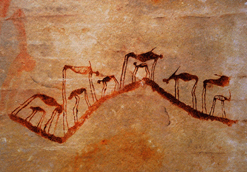 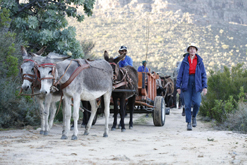 While it may have lessened the load the
hikers had to carry, the donkey cart
didn’t ensure a complete lack of
discomfort.
(Image: Shaen Adey)

I’m an avid hiker, but as I’ve got older – no, let’s not been so harsh – wiser and more mature, I’ve found the logistics of multi-day hiking in South Africa somewhat taxing.

Much as I love escaping to the wilderness for a few days, the thought of cramming my tent, sleeping bag, clothes and dehydrated rather than “proper” food into my rucksack (for a foodie like me the worst sacrifice) and then lugging it on my back for the duration of the trail, is almost guaranteed to put me off.

So it was with some delight that I discovered a clutch of new multi-day hiking trails where your bags are transported between overnight spots while you walk with just your camera, lunch and a waterproof in your daypack.

“Slackpacking”, as this refined form of hiking is coined, has long been popular in the US, New Zealand and Europe but has only caught on in South Africa in the last decade. But its growth has been fast and there are now at least 30 slackpacking trails in the country. Most are along spectacular sections of the coastline, but a few criss-cross mountain wilderness areas that were previously the preserve of only the fit and self-sufficient, khaki-shorted, hardy hiker.

The latest addition to the fold is the Cederberg Heritage Route (CHR). In common with many other slackpacking trails, the CHR is much more than just a hiking trail. The guided three- to five-day route options include cultural visits and rock art tours.

It offers unique Cederberg experiences that give the visitor an exceptional insight into the spectacular natural and cultural landscape of this remote corner of the Cape Floral Region World Heritage Site.

Back into the past

On day one, however, I was questioning my choice of trail. Our group, mainly in their 50s, had spent a delightful morning exploring the rock art sites of the Jan Dissels River Valley. David Swart, a local guide trained up as part of Clanwilliam’s Living Landscape Project, was passionate about his job and could barely control his enthusiasm for the paintings.

He bounded from site to site, squatting down to show us ochre-coloured eland, tiny outlines of fat-tailed sheep, and the distinctive depictions of shamans and explaining the trance scenes and the pressure points.

He took us back a couple of millennia to when San and, later, Khoi people lived in this beautiful valley; made us stand out at the edge of the shelters so as to understand importance of aspect in the choice of sacred sites and cave dwellings and captivated us with the rich heritage of the Cederberg.

It was a pleasant, leisurely walk, and by the time we’d retraced our steps and driven the short distance to the lunch-stop at the grave of Louis Leipoldt (a famous local poet, doctor botanist and cook), we had shaken off the stresses of the city and were enjoying the pace of life in the mountains.

Then came the donkey cart ride. It sounded innocuous enough, a sedate transfer from the top of the Pakhuis Pass some 12km down the 4×4 track to Heuningvlei, one of the old mission villages nestled under the towering Krakadouw Peak. Once the donkeys had been rounded up and harnessed, we clambered onto the traditional wooden carts and waved David goodbye.

Hanging on for dear life

The donkey cart is still the main form of transport in the area and the three pairs in the train clearly knew the ropes. But it was not all smooth going. Potholes had developed in the sandy track following a bout of unusually severe winter rain, so the initial uphill stage was far from smooth, while the descents were quite terrifying as the donkeys, knowing that they were homeward bound, chafed at the bit.

Our toothless driver attempted to slow us down occasionally by ramming his foot on the brake – a piece of old car tyre attached to the back wheels – but it was obvious, if unnerving, that he was perfectly comfortable with the pace.

We hung on for dear life, knuckles white as we bounced up and down on the cushions covering the hard wooden benches, hoping that the donkeys could canter faster than the cart’s gathering momentum. At the bottom of each hill the pace would slacken allowing our thumping hearts to calm down before the next charge.

It was exhilarating stuff and we arrived at Heuningvlei in need of a stiff drink. The thorough pre-trip notes had warned that there was no alcohol to be had in the mission villages, so we’d secreted some whisky (and a couple of wine boxes) in our bags. Under the circumstances, it was a wise precaution – this is, after all, a trail for those who like life’s spoils.

Our luggage was unloaded and Anna Ockhuis welcomed us into her home, one of the community guesthouses that accommodate hikers. Although new to the game, and by no means fluent in English, the villagers have embraced this new venture and what they lack in sophistication, they more than make up for in warm hospitality.

The Cederberg has a couple of basic stone huts in the wilderness area but until the trail was developed there was nothing more comfortable. Now, as we were experiencing, you can hike all day and arrive at a village to find a cup of tea, hot shower, wholesome meal and a soft bed waiting.

In keeping with the aims of the trail – to spread the benefits wide – our chefs, Rene Veloen and her mum Helena Ockhuis (the Ockhuis’ were the original farm owners and every second person we met seemed to carry the surname), were from different households and they appeared soon after our arrival to ask what time we’d like to dine.

Supper arrived on the dot – a vast meal of meatballs, chicken, braaivleis, boerewors sweet potatoes, a local specialty sous bonntjies (beans in curry sauce) and fresh salad presented by our beaming chefs. I’d stated that I was vegetarian and was impressed by the varied offerings. There was always a tasty tuna bake, macaroni cheese or vegetable hotpot laid out.

Helena giggled when we asked what the rich sponge dessert was. “I call it telephone pudding,” she explained. “It’s so quick to make that I can do it in the space of a phone call.”

On the Wuppertal trail

From Heuningvlei, the routes diverge with hikers on the five-day Wuppertal trail spending the next day either hiking or swimming among the incredible rock formations, rare cedar trees and wild flowers or, if they are strong hikers, scaling Krakadouw Peak for its spectacular views. They then spend a second night at Heuningvlei before continuing on the trail, via the village of Brugkraal, down to the Moravian Midssion village of Wuppertal, the oldest settlement in the region.

Our route led up from behind the village to Krakadouw Pass. It was a magnificent hike. Our guide, Joey – you guessed it – Ockhuis, has lived in the valley all his life. He took us to a rock shelter with some poorly-preserved paintings where one of his friends had lived for 35 years while working on the road to Pakhuis Pass. We’d come down that road the previous day and he pointed out a well-preserved stone canal system, which carried water to what had been the garden.

We stopped for a quick break at the stone hikers’ hut at base of Krakadouw Peak, wishing that we had the extra day to scramble up to its craggy summit, and then headed on up to the neck. The path steepened, but was surprisingly well maintained with stone steps and rainwater channels.

The great walls of Krakadouw rose above us punctuating the deep blue sky, and at the saddle the exposed, weathered sandstone rocks were a burnt orange – a stunning backdrop to the clusters of purple and pink everlastings.

Once over the pass, the scenery changed dramatically. We dropped down sharply into a green, vegetated kloof and enjoyed the shade provided by stands of yellowwoods. Joey held out some small plants for us to taste – yum yums – a sweet, refreshing clover. After a couple of hours the gradient eased off and a round fort came into view on the ridge above us.

“The British built this blockhouse in 1901 during the Anglo-Boer War,” Joey told us. We had no idea that the troops had penetrated so far into this mountainous terrain.

Below us we could see the Boskloof cottages and the end of the trail. We sauntered along the river, enjoying the sunshine and the yellow daisies. Although no walk in the park, the pace and terrain of the hiking section had not caused our averagely-fit group any problems.

Our celebratory braai that night, in Klein Boschkloof, a delightful guesthouse on a citrus farm, was under a star-studded sky the like of which I have never seen. The Cederberg is only two hours from Cape Town yet there was not a single artificial light to be seen. It’s a rare privilege to venture so deep into the mountains and to experience life in the communities. It had been a very, very special trail.

Fiona McIntosh is the author of Slackpacking: A Guide to South Africa’s Top Leisure Trails, published by Sunbird.