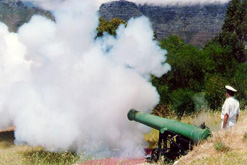 Jaded office workers barely look up from their desks when the cannons of Lion Battery boom across the city, but tourists are easy to spot, jumping in alarm with the frenzied look of someone under attack.

In truth, though, the two 18-pounder smooth-bore muzzle-loading guns on the slopes above the city have not been fired in anger since the short-lived Battle of Muizenberg (PDF, 113 KB) on 7 August 1795.

That’s just one snippet of Cape Town trivia you’ll discover on a visit to the Lion Battery on the rump of Signal Hill, where each day an officer from the South African Navy regales a small crowd of tourists and curious locals with the history of Cape Town’s oldest living tradition.

Cast by London’s Walker & Company in 1794, the two cannons were brought to the Cape during the 1795 British occupation and for over a century were fired from the Imhoff Battery in the city bowl.

The noon firing wasn’t simply a case of trigger-happy soldiers, though. The daily firing allowed ships to set their chronometers to the correct time – vital information when navigating by sextant on the high seas. During the First and Second World Wars the daily firing was also used to mark a two-minute silence for the fallen.

In 1902, with the city of Cape Town growing around the Imhoff Battery, the decision was made (presumably encouraged by deafened residents) to move them to their current site on the slopes of Signal Hill.

The two cannons – only one is fired, but both are loaded daily in case of a misfire – are the oldest of their type in the world and, as the signboard at the Battery will tell you, have been fired over 63 800 times since 1803. In all that time it has failed to fire only once – in January 2005.

Although the Battery now falls within the Table Mountain National Park, the South African Navy is still responsible for firing the guns six days per week. Sundays are for rest … and peace and quiet.

So, with cannons loaded, how is the gun fired (video) at exactly noon each day? The apocryphal explanation goes like this. A man walks into a Long Street watchmaker, and notices that all the clocks on the wall are showing precisely the same time. “How do you always know the correct time?” the man asks.

“Well, I simply listen for the Noon Day Gun, and I set all my clocks by that,” replies the watchmaker.

Intrigued, the man decides to visit the Noon Day Gun, and asks the Navy officer on duty how he knows when it’s exactly noon to fire the cannon. “Well,” says the officer, holding a telescope to his eye, “there’s this watchmaker down there on Long Street with a clock in the window …”

The reality is far more precise. An electrical signal is sent from the South African Astronomical Observatory (which has an unfailingly accurate atomic clock) a few milliseconds before noon. This burst of energy zips across telephone lines, ignites the firing cap on the cannon, sparks the gunpowder and … boom!

The show might be over for another day, but that’s only half the attraction of this corner of Cape Town. Just a short walk from the cannons you’ll find a slice of the Cape’s culinary history.

At the top of Longmarket Street, surely the steepest road in Cape Town, the last house on the left has been home to the Misbach family for over 65 years. For the last 16 it’s also been home to one of Cape Town’s loveliest restaurants, the Noon Gun Tea Room and Restaurant.

Long popular with overseas tourists, curious locals are slowly starting to venture up the steep cobbled street to tuck into the delicious bredies, breyanis and bobotie cooked up by Zaini Misbach and her family.

“These are all my grandmother’s recipes. Passed on from her grandmother, and then her grandmother,” says Zaini. “The original Malay people made do with the spices they found here in the Cape so they are spicy dishes, but toned down from what you’d find in the East.”

Main courses range from R75 to R95, but come in hearty portions that offer great value for money.

“On Saturday nights we have what we call our ‘Recession meal’, which is just R65 per person for a three-course meal – and there’s live jazz too!” says Zaini.

Whether you stop in for a recession-busting bredie or just block your ears at the stroke of noon, this is certainly one corner of the Cape’s colourful history worth exploring.