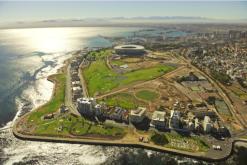 The City of Cape Town has launched a year-long pilot project to improve the quality of storm water running into the sea at three of its popular bathing areas.

According to the municipality, this is the first time that this kind of initiative, involving end-of-pipe treatment, will be undertaken in South Africa.

If the project is successful it will be taken to other beaches along the city’s coastline.

Two storm water outlet sites at Three Anchor Bay and one at Rocklands, in adjacent Sea Point, all within 10 minutes of the city centre, are earmarked for the pilot project, with infrastructure construction already under way.

The sites were chosen because of their proximity to the city’s management offices as this minimises costs.

A different treatment method will be used at each of the three sites to test the environmental impact and cost effectiveness as well as their efficacy under local conditions.

“The outcomes of the monitoring report will determine whether it is viable for the city to roll out interventions similar to the three pilots at other non-compliant bathing beaches, but on a much bigger scale,” says Brett Herron, mayoral committee member for Cape Town.

Three Anchor Bay is wedged between Mouille Point and Sea Point on the Atlantic seaboard, considered to be one of Cape Town’s prime property locations.

Along this beautiful stretch of beachfront lie the glamorous, sought-after areas of Clifton, Camps Bay, Fresnaye and Llandudno, each with its own character. Some have spectacular swimming beaches, and all share the magnificent Table Mountain and Twelve Apostles range as backdrop.

Preliminary tests done by consulting engineers Jeffares and Green at strategic outlet areas in Sea Point and Mouille Point revealed that the quality of the storm water did not comply with the Department of Water Affairs’ regulations.

The study also found that stormwater runoff was one of the major contributors to pollution of sea water in Cape Town, especially during low water-flow periods, says Herron.

It is estimated that the construction process will take about five months, after which the assessment will start in earnest.

A building being constructed at Rocklands will house the ultraviolet (UV) disinfection equipment. This technique makes use of UV light to penetrate bacterial cell walls, which, in turn, disrupts the reproduction process of the microbes.

The method is considered to be simple and easy to install and maintain. Unlike the chlorine treatment, it leaves the water with no chemical taste or smell and is therefore more environment-friendly.

“Since these are pilot projects, monitoring is essential, especially in the case of the chlorination treatment, to see if it is viable to continue with chlorination disinfection,” says Herron.

The effect of chlorine on marine wildlife has not been established, but it is of concern to the municipality and will be closely monitored by an independent marine biologist.

Feedback received from the public during the environmental impact assessment and public participation process had been “very positive”, says Herron.