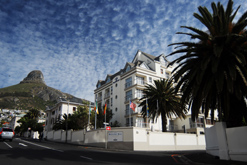 Cape Town’s range of luxurious hotels and
spectacular scenery make it one of the
top tourist destinations in the world.
(Image: Jeff Barbee,
MediaClubSouthAfrica.com image library)

Cape Town is one of British Airways passengers’ favourite international destinations, an impromptu study of global booking trends has revealed.

Although the 2010 Fifa World Cup undoubtedly contributed to the trend, with 34 000 passengers flying from London to South Africa during the month-long event, “demand for flights to Cape Town was on the rise even before the tournament”, said BA’s commercial manager in South Africa, Sue Botes.

Airline spokesperson Stephen Forbes said the World Cup success built on the city’s 2009/10 summer season, when Cape Town emerged as one of the 10 most popular destinations for BA passengers flying from London.

Preliminary estimates by the South Africa’s Department of Home Affairs reveal that more than 1-million foreign tourists entered the country in June and July 2010, which puts BA’s portion of arrivals at about 3.4%.

The London-to-Cape Town route is busiest from November to March, the height of the South African summer, when BA ups its number of weekly flights to the city from seven to 13.

Cape Town is largely a leisure destination, so demand is seasonal. Johannesburg, on the other hand, is a popular business centre, so BA’s services for that city are pretty constant throughout the year, Forbes said.

A hit with World Cup visitors

Cape Town’s popularity was also revealed in a recent poll by the Western Cape government and Cape Town Routes Unlimited (CTRU), which markets the city as a tourist drawcard.

It showed that 96% of visitors during the World Cup had a more positive perception of the city than before, and that 32% would visit it and the rest of the Western Cape province again after the tournament. An additional 66% of tourists said they planned to bring their families along on their next trip to Cape Town.

The majority of visitors gave their World Cup experience of Cape Town a nine out of 10, which was in the category of “very good” to “excellent”.

A visit to Table Mountain was the best part of the trip for 42% of the respondents, while 34% of the tourists liked Cape Point the most. Other highlights included sampling the many fine wines produced in the province and meeting South Africa’s “friendly and helpful people”, the poll found.

With Cape Town well established as a top international attraction, there is talk of the city bidding to host the 2020 Olympics.

Speaking at a council meeting on 28 July, mayor Dan Plato said many South Africans are keen for Cape Town to host the games in a decade’s time.

“People feel that, based on our World Cup success, Cape Town should bid for the Olympics. It seems like the next logical step, but it requires careful thought, not an emotional response.

“The World Cup is staged by a country, the Olympics by only one city. It would be inconceivable to host it without support and guaranteed funding from the national government.”

Plato also said there were many matters to consider before making the final decision on the bid.

“We will first complete our debriefing of the World Cup. We will then take stock of our service delivery priorities, which include poverty alleviation, housing and services. Next we will do a gap analysis to ascertain the facilities, venues and services required to host the Olympics, against what Cape Town currently has.

“We must establish what it will take and cost to provide the rest, and whether hosting will contribute to our long-term goals as a city. Finally, we must be certain of the social, economic and environmental benefits.”

Its world-class venues, diverse natural beauty and hospitable people are key ingredients in pulling off these off, the mayor said.

Weekly surveys done by Cape Town Tourism during the World Cup revealed that the majority of visitors were from the UK and US, but there were significant numbers from previously untapped markets such as South America and the Far East, where efforts to further promote the city are already under way.

A number of Cape Town and Western Cape tourism organisations participated in trade workshops in China, Hong Kong, Korea and Japan from 22 to 30 July, and high on the agenda were the province’s upgraded road networks, transport facilities, five-star hotels and creative cuisine offerings.

It was estimated that 1 150 Asian trade and media members would attend the workshops.

“Cape Town and the Western Cape experienced a 40% growth in tourism arrivals from China last year, compared to 2008. We must build on this and make even sharper inroads into a market that is regarded as one of the fastest growing outbound tourism markets in the world,” said Calvyn Gilfellan, CEO of CTRU.

The appetite for Cape Town and the Western Cape has grown exponentially, said South African Tourism’s Bradley Bouwer, who attended the workshops.

“We’ve experienced a definite and real interest in South Africa since the World Cup, and a better response from travel trade and media here,” he said. “This is indeed our moment. What the South African tourism industry needs to do now, is ensure that the country remains the value-for-money destination that it really is.”

The workshops came at just the right time as both Japan and South Korea are bidding to host the 2022 Fifa World Cup, while it is rumoured that China may bid for the 2026.

This offers a valuable opportunity for the Western Cape to share its 2010 World Cup experiences with these countries, which will hopefully further promote it as an appealing tourism destination.

“Through our participation in the workshops, we will ensure that the publicity we received during the World Cup is converted into increased arrivals to our beautiful province,” said Alan Winde, Western Cape MEC for Finance, Economic Development and Tourism.