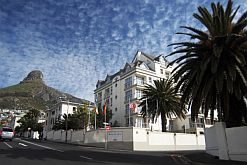 The city was lauded by the judges for approaching local issues from a responsible tourism perspective.

The adoption of a responsible tourism charter in September 2009, as part of the city’s Tourism Development Framework (PDF, 556Kb), scored high points with the panel. This policy brings together the corporate sector and city management to collaborate on local priorities and make the city a better place to live in, work in, and visit.

Progress towards goals laid down in the charter will be made public for all residents to follow. A code of conduct, also part of the framework, is available for visitors to the city, encouraging them to behave as responsibly as possible.

Ian Neilson, the city’s executive deputy mayor, was on hand to accept the award. “This means that it is not only our city’s splendid natural beauty that makes Cape Town a great tourist destination,” he said, “but also the fact that we have a leading tourism and hospitality industry.”

Neilson added that Cape Town stood ready to greet the world in 2010, as one of the nine host cities for the upcoming Fifa World Cup.

The City of Cape Town – which is also a municipal district – was the only municipality nominated in the destination category, but it had no trouble trumping the other 35 nominees.

Southern Africa was a triple winner at the awards evening.

Guludo Beach Lodge in Mozambique won the poverty reduction category for the work its doing to uplift the local community. The judges commented on the major impact the lodge has had on people’s lives since it started making improvements to children’s healthcare and education.

Among other achievements, Guludo has boosted school attendance, handed out mosquito nets, and provided safe drinking water, bettering the lives of thousands of people.

South African conservation organisation Great Plains was the best in the conservation of wildlife and habitats category. The initiative works in five African countries to alleviate humans’ impact on the environment and promote the preservation of the continent’s precious biodiversity.

Great Plains has been particularly successful in Kenya’s Maasai Mara reserve, where it has helped establish a 32 400ha conservation area that guarantees a payment to local communities for the rental of their land.

Gavin Bate, the founder of Adventure Alternative and the Moving Mountains Trust, was named the winner for best personal contribution. Bate set up adventure travel projects in Kenya, Nepal and Tanzania, only to hand them over to the local people, providing them with training, guidance and a minimum of 10 years of employment.

The Virgin Holidays Responsible Tourism awards attracted more than 2 000 entries from around the world in 2009. The competition was founded in 2004 by responsibletravel.com, which partners with the Daily Telegraph, the World Travel Market, and Geographical magazine, the monthly publication of The Royal Geographical Society.

Title sponsor Virgin Holidays came on board in 2007. The company, which is part of the Virgin group, offers holiday packages to destinations all over the world.

Founder Richard Branson announced in 2006 that all profits received from Virgin Holidays, the Virgin Atlantic airline, and Virgin Trains would be invested in research and development for renewable energy sources. The total amount is estimated to be around $3-billion (R37-billion) over the next 10 years.

With 13 categories, the Responsible Tourism programme recognises and rewards those companies that go about their business, whether niche or mainstream, with the sustainable welfare of the environment in mind. Awards are given to individuals or companies that are committed to preserving the cultures and communities in which they operate, and strive for effective biodiversity conservation.

Goodwin and his 12 fellow judges, who were drawn from partner companies and related tourism concerns, evaluated almost 600 nominee organisations, individuals and destinations across the globe.