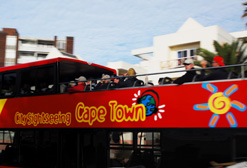 Tours of the city of Cape Town on an
open-air bus give visitors a birds eye
view of the city.
(Image: Jeffrey Barbee,
MediaClubSouthAfrica.com. For more
photos, visit the Image library) 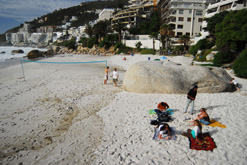 The white sands and glistening waters of
Clifton Beach is a hit among tourists.
(Image: Jeffrey Barbee,
MediaClubSouthAfrica.com. For more
photos, visit the Image library)

Cape Town’s diverse tourist attractions have earned the city a spot on an internationally recognised list of the top 50 places to visit. Named as highlights on the list are, among others, Cape Town’s hotels, festivals, entertainment, activities, restaurants and nightlife.

The Places of a Lifetime list, released by National Geographic, a leader on nature and travel, features 50 of the world’s top destinations which no curious tourist should miss, including Rio de Janeiro, Mumbai, Hong Kong and New York.

Cape Town is famous for five-star, award-winning hotels such as the Mount Nelson, which was voted Africa’s Leading Hotel at the 2008 World Travel Awards Africa and Best Hotel in Africa in the Daily Telegraph’s Ultratravel One Hundred Awards. For visitors on a budget, there are also a range of conveniently situated backpacker and self-catering options.

Soaking up impressive stretches of beach, viewing the city from the top of table mountain – which can either be summited in a cable car or on foot, whale watching, museum hopping or township touring are just some of the activities on offer – sure to suit any visitor’s pocket or mood.

The National Geographic website also mentions some vibrant night spots: it describes the Alba Lounge “as the coolest bar at the V&A Waterfront” and La Med in Clifton as “probably the best mix of people – from models to backpackers just off the overland bus.”

“To be acknowledged by such a well-known and esteemed travel publication online is indeed an honour for our city and province,” says Calvyn Gilfellan, chief executive of Cape Town Routes Unlimited. “It is not only a recognition of Cape Town and the Western Cape’s growing status as one of the world’s top tourism destinations, but also of our tourism industry and partners who work so hard to keep our city and province a top-of-mind destination. Cape Town Routes Unlimited is very excited to have been invited to be part of this project.”

The city is also host to several festivals during the year, one of which is the Cape Minstrel Carnival that sees more than 35 marching troupes don flamboyant satin outfits and strum musical instruments in a parade through the city to usher in the new year. The Cape Town Jazz festival, featuring local and international jazz maestros, is also one of many highlights on the calendar.

On the entertainment scene, the city boasts a variety of theatres showcasing top local arts talent. The Baxter Theatre, housed in a charming Capetonian-style building on the premises of the University of Cape Town, is regarded as one of the best places to see live drama, comedy and music.

Cape Town is South Africa’s biggest tourism draw card, attracting more than 1.8-million international visitors each year. Current predictions are that this number will double by 2010.

Do you have queries or comments about this article? Email Tamara O’Reilly at tamarao@mediaclubsouthafrica.com.