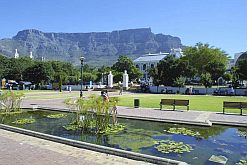 A tranquil scene in the Company Gardens,
situated in the heart of Cape Town next to
the parliament precinct.
(Image: City of Cape Town)

The Green Point stadium in July 2009,
with Table Mountain in the background.
(Image: City of Cape Town)

A selection of the icons that will soon
become familiar to everyone using the
Cape Town green map.
(Image: Green Map System)

Green-minded Capetonians and visitors can now rest assured that their living, working and playing impact on the environment will be minimal, thanks to the Cape Town green map.

The green map joins other projects in one of nine Green Goal target areas, this one set to specifically promote environmental awareness, sustainable lifestyles and environmentally efficient building practices.

Projects include an anti-littering and waste recycling campaign, a campaign to encourage drinking of tap water rather than bottled water (as the quality of local tap water is more than sufficient), and green buying for events related to 2010.

Plans are underway to include the green map in the 2010 visitors’ and event guides, thereby promoting responsible tourism.

And as a 2010 legacy project, the map will endure as a valuable resource for residents, visitors and the commercial sector.

Launched on World Environment Day in June 2009, the green map is currently only available online, but a print version is expected before the end of 2009.

Cape Town is one of the few cities on the globe to lie within a national park and according to city management, is therefore perfectly positioned to lead the way on the continent with a green map. Not only is the initiative the first in Africa, but it is also the first to map the city from a green perspective.

As one of the world’s most sought-after destinations, Cape Town is bracing itself for a surge of football- and nature-mad tourists over the months of June and July 2010, and beyond. Cape Town is a 2010 host city, and now boasts a state-of-the-art, newly renovated venue – the spectacular Green Point stadium that is scheduled for completion in December 2009.

The region is also home to the Cape floral kingdom, the smallest of the world’s six floral kingdoms, but by far the richest. At least 70%, or about 6 200, of the 9 000-plus plant species of the Cape Floral Kingdom are found nowhere else on Earth. There are six endemic species of birds, four of mammals, 22 of reptiles, 16 of amphibians, and 14 of freshwater fish.

This unique environment and wealth of biodiversity is one of the city’s greatest assets. The development of the green map aims to help protect that environment by guiding visitors and residents in ways of sustainable living.

It also points out the greenest spots in Cape Town and offers an ever-growing directory of green products and services. These include green spaces, alternative energy sites, green accommodation, green markets and eateries, green events, recycling sites and drop-off points, and much more.

Cape Town is now part of a worldwide network of 566 similar maps in 55 countries in the Green Map community.

One of the project’s outstanding features is that it is powered by the open source Green Map system, which combines a globally accepted set of standard icons with Google’s advanced mapping technology. Users are encouraged to submit their favourite sites for inclusion.