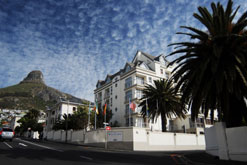 The majestic tree is a favourite with visitors
to the area, and may now be viewed again
after a hiatus of 36 months.
((Image: MediaClubsouthafrica.com. For
more free photos, visit the image library)

Cape Town has made it onto Forbes magazine’s list, released earlier in 2010, of the 12 most beautiful cities in the world.

According to Forbes, the Mother City is on a par with Paris, Vancouver, Sydney, Florence, Venice, San Francisco, Chicago, New York City, Cambridge, Tokyo and London as the most scenic travel picks.

While the list has generated much heated online discussion, and many people have agreed or disagreed with the selections, most would concur that Cape Town is one of the most visually pleasing destinations to be found anywhere.

The Forbes list is drawn up in consultation with experts from a range of relevant fields, including architecture, urban planning and sustainable development.

Towards the end of 2009 Cape Town was also named one of the world’s top 10 party cities by the travel guide Lonely Planet, in its 1 000 Ultimate Experiences publication. The city joined Buenos Aires, Dubai, Montreal, Thessaloniki, Belgrade, La Paz, Baku, Auckland and Tel Aviv as a desirable destination for those who love a laid-back atmosphere during the day and a festive vibe at night.

Cape Town is the only city from a developing nation to have made the cut, and the only one on the African continent.

Forbes was particularly impressed by Cape Town’s open spaces. According to environmental engineer Levitt, the city was also singled out for its small ecological footprint compared to sprawling metropolises like Tokyo and New York. This, he said, was a result of its “manageable size”.

A 2010 Fifa World Cup host city, Cape Town is gearing up for the tourist influx with a host of infrastructure upgrades, such as the Integrated Rapid Transit system and the impressive new Cape Town stadium and its associated Green Point Common, which is being developed now that the stadium is fully functional. The common is expected to become an important social gathering site once complete.

Cape Town also hosts a number of other popular sporting events, such as the annual Cape Argus and Cape Epic cycle tours and the Two Oceans ultramarathon. Participants from all over the world descend on the city to pit their skills and endurance against the best athletes in these taxing sporting disciplines.

The city has an abundance of unspoilt beaches for those who love to soak up the sun, and it is also known for its bustling nightlife and fine restaurants. Some of the top establishments in the country are to be found here, a number of which have also won international acclaim.

A little further inland, the Cape winelands offer award-winning wines from many world-renowned estates, some of them possessing an ancestry that dates right back to the early days of the Cape’s colonisation by the Dutch.

The city also boasts many highly rated hotels, ranging from the brand-new One and Only – part of a growing international chain developed by South African hospitality tycoon Sol Kerzner – to the venerable Mount Nelson, which opened on 6 March 1899 and is a favourite of well-heeled travellers.

No description of Cape Town would be complete without a mention of its most spectacular landmark, the flat-topped Table Mountain, part of the 30 000ha Table Mountain National Park, administered by South African National Parks. Not only is the site home to a wide range of animals and birds, it’s also popular with thrill-seekers who are able to hike, climb, cave, and base-jump from its many cliffs.