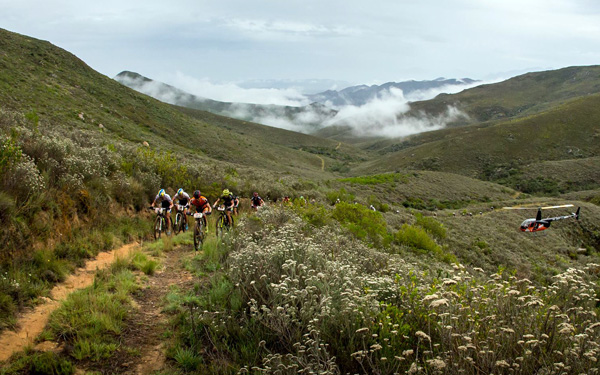 An eight-day race taking in some of the Western Cape’s most beautiful mountain passes, the Absa Cape Epic is a gruelling 800km effort with some 15 000 metres of climbing. (Image: Absa Cape Epic)

It’s tough, tough, tough – but that’s why they sign up. Each year athletes from around the world descend on Western Cape to test their extreme endurance skills in the Absa Cape Epic mountain bike race.

Now in its 11th year, the race attracts Olympic medallists and previous world champions, as well as some of South Africa’s top riders. An eight-day race taking in some of the province’s most beautiful mountain passes, it is a gruelling 800km effort with some 15 000 metres of climbing.

It is ridden by two-person teams and is the most televised mountain bike stage race in the world, according to its founder, Kevin Vermaak. It is the only eight-day mountain bike stage race classed as hors catégorie, meaning “beyond categorisation”, by the Union Cycliste Internationale (UCI), making it “a highlight on the professional racer’s calendar”. The race also attracts aspiring amateur riders wanting to test themselves against the best in the world.

Vermaak, who established the Cape Epic back in 2004, says he is pleased with how it has developed. “[I am] incredibly satisfied, when I think that sporting legends like Alain Prost, John Smit, Luis Enrique, amongst many others, all take time out to train for the race and come to South Africa every year to ride it. It’s an honour.”

In 2002, Vermaak participated in the 10th edition of the 400km La Ruta de los Conquistadores mountain bike race across Costa Rica – and the idea to create a multi-day mountain bike stage race was born. The Cape Epic takes a different route each year, and Vermaak and his team ride the new route at least twice before settling on their final choice. Each year, it is selected on the basis of “most amazing mountain biking riding that the Western Cape has to offer”, he says.

Asked what gives him the most satisfaction, he says: “The 30 minutes around the time when the winners come in every day. It’s a moment of the event in which we invest so much money and effort, to get it just right for TV and all the fans and spectators watching, and it’s something that really differentiates us from all other mountain bike races around the world – to know that the guys coming in at that moment are the absolute best riders in the world, all the Olympic medallists and previous world champions.”

Amateur mountain biker Lynn Morris, who cycled the race in 2009, says she did it “because it sounded tough and I love mountain biking”.

“The hardest part was making the cut-off times every day, and of course the climbing! The most enjoyable parts were the stunning landscapes and the feeling of camaraderie amongst the cyclists (at the back of the field).”

Vermaak says the “satisfaction of finishing the Epic is priceless. And the camaraderie of riders during those eight days and all the months of training leading up to the race are truly special. For many, it’s a life-changing journey.”

This year, many riders came in covered in mud, having gone through forests and splashes of water, up and down rocky ridges, some too steep to descend, requiring riders to walk their bikes, and over wooden walkways. Some 1 200 cyclists entered, and just under half of them finished the course. Overall prize money is R1.7-million (about $161 000); the entry fee is R53 900 (about $5 100) per two-person team.

The Absa Cape Epic is just one of seven or eight endurance races that are held in South Africa every year, when athletes of all ages and abilities run, swim, paddle and cycle their way across the country.