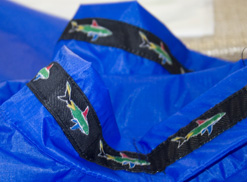 The shark motif on the decorative braid
that started off the Cagey Gear business. 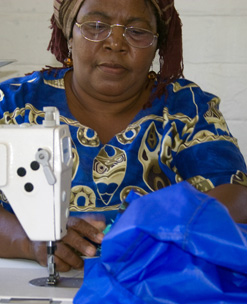 Tourism is one of the fastest growing sectors of South Africa’s economy, and is ideally placed to create new jobs. But when people think of those jobs, they tend to think of waiters, hotel managers, field guides and housekeeping staff. What they often forget is the spin-off of tourist industries. Sometimes a well-developed tourism product can provide unexpected benefits.

The little town of Gansbaai, in the Western Cape just a few hours’ drive east of Cape Town, offers an excellent example of this. Having long languished in the shadow of its much more glamorous neighbour, Hermanus, on the other side of Walker Bay, this little fishing village gained international recognition in the late 1990s and early 2000s as the best shark cage diving destination in the world.

The prosperity brought by the increased number of visitors can be clearly seen in the town. Guest houses, shops, restaurants and other small businesses have sprung up to service both tourists and residents.

Most of the shark cage diving boats leave from the small-boat harbour at Kleinbaai, a few kilometres from Gansbaai. The unpretentious little harbour – in fact little more than a slipway – started seeing huge numbers of local and international tourists. And no-one was taking advantage of the captive market.

But Kim MacLean and Terry McCarthy, who together run Shark Lady, a shark cage diving company, saw the gap. They teamed up with Colleen Emmenis and Annalie Theunisson, from Art-i-kapa. Theunisson and Emmenis, both artists, are accredited trainers in the Media, Advertising, Printing, Publishing and Packaging Sectoral Education and Training Authority. They trained a couple of people in craft making, and took over two little kiosks at the harbour. They were a mess, but they tidied them up, and then they started selling craft on a small scale.

“We had one little sewing machine,” says MacLean. “A domestic sewing machine.  So we started sewing braid onto clothing for the crew.”

The braid was a pretty South African flag-inspired shark motif that MacLean had designed, and it looked great. “All my clients wanted to buy the crew’s clothes from them.”

This gave her an idea. She had always wondered how she could employ more people in her business but there are only so many jobs on a boat. So she, McCarthy, Emmenis and Theunisson decided to start a clothing manufacturing venture to employ women in the area.

Luckily, Shark Lady was about to start building new custom-designed premises in front of the harbour. There was an existing building there, and MacLean thought maybe it could be turned into something useful.

“Let’s not bulldoze the building. I told Solly [Solly Madikane, Director of Socio-Economic Development, Overstrand Municipality]. We’ll take it apart carefully and, if you can organise the trucks to move it, we’ll re-erect in Masakane [the local township] to be a small clothing factory.”

But Madikane had a surprise for her. He took her into the township and showed her an empty building with 16 industrial sewing machines in it. They were part of an employment-creation project that had never got off the ground. After a little paperwork Cagey Gear was born.

“The name came into my head about two years ago. Then, when we knew we were going to get this building going, I decided I must start getting Cagey Gear going.”

It’s early days yet, and the range so far includes sweatshirts, fleeces and light rain jackets that can be folded into a pocket so they double up as a small bag or even a travel pillow.

While the main reason for opening the factory is to create employment, there are lots of spin-offs. First, it certainly doesn’t harm Shark Lady’s bottom line. But, more importantly, it’s an opportunity for MacLean get on her favourite hobby horse.

“I want to do T-shirts with a conservation message on them. Not just bland things – really funky designs with a good message.”

These will work in two ways. Hopefully, the people buying them will endorse the message and pass it on, but it’s also part of her plant to use the factory to start to conscientise the community about marine conservation. It will be tied in with an educational programme for children, and MacLean is hoping to get marine conservation specifically put into the curriculum of the new school that is currently being built at Blom Park – Gansbaai’s second township area.

And it’s not just clothing. Shark Lady’s brand new shark diving centre, called The Great White Shark Embassy, and which will constitute the main outlet for Cagey Gear, is also a restaurant and emporium selling all manner of things sharky.

“Kids are always coming in here wanting to buy shark’s teeth,” MacLean says. “So we thought of making little resin teeth. On the back of the card it will explain why you shouldn’t buy real shark’s teeth.” This would form part of the craft programme that is to be run together with, but separate from, the clothing factory.

It’s early days yet, sales have been good.

“Things are walking out the shop,” MacLean says. “We’re working hard to keep up.”

But she’s confident that they will rise to the challenge. “It’s going well and I think it will grow into a big brand, so we’ll have to enlarge the factory. “ 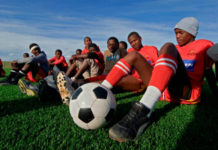 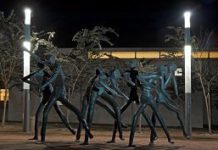 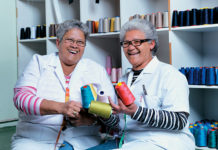