A magnificent sunset from the Buffalo
Ridge pool deck. 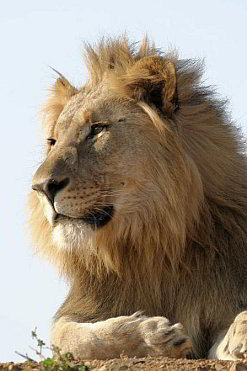 Situated in the expansive Madikwe game reserve, just three hours north-west of Johannesburg, Buffalo Ridge is a luxurious lodge that can accommodate up to 16 guests – but what sets it apart from other five star lodges is that it is owned entirely by the Balete people of Lekgophung, who live near the Botswana border.

For many high end leisure travellers to or in South Africa, the phrases “community-owned” and “community-run” have been known to set red lights flashing and alarm bells ringing.

A brief township tour, the novelty of an overnight stay in a rural B&B or the quaint produce on offer at a craft market add to the experience – but if you want to travel in style, stay in luxury and enjoy the best of the best, private commercial service providers are a safer bet.

That, at least, is the orthodox, albeit unspoken wisdom in the tourism industry.

It speaks to various assumptions about what is meant by experiencing a country. For people from Western countries travelling in the developing world, this leaves two implicit options: either you can really interact with the citizens and try to live as the locals do – which equates to slumming it – or you can enjoy your creature comforts, in which case you’ll be prevented from engaging with their authentic way of life.

In mixed economies such as South Africa, affluent domestic tourists who want to see other parts of their own country seem to face the same dilemma. Those with the means to travel from, say, Cape Town or Johannesburg and spend a holiday in a game reserve are no more likely to have substantial contact with their poorer compatriots than visitors from England, America, Germany or Japan.

Coommunity upliftment – not just a cliché

While there is general consensus over the need to change structural inequalities in South African society – “empowerment” and “upliftment” have become clichéd words – attempts to restore both dignity and economic muscle to historically disenfranchised communities have met with mixed success.

Perhaps it’s not surprising, then, that describing an enterprise as community-owned and community-run often results in raised eyebrows and dubious expressions, and that it can be, to put it bluntly, a turn-off for prospective customers.

There is a cure for such scepticism, however: Buffalo Ridge. Each of the lodge’s eight chalets is beautifully appointed, and the main building commands a staggering view over the Madikwe plains. The lodge boasts all of the perks one might expect of a five star bush establishment: private game drives, plenty of good food and wine, effusive warmth from the staff.

Buffalo Ridge was the first such establishment to be entirely community owned, and although it is no longer unique, it is still highly unusual. Buffalo Ridge is leased to and managed by the Madikwe Collection, a portfolio of lodges spread across the 75 000ha reserve. Madikwe Collection founders Carl Trieloff and William Stephens have demonstrated both financial and ecological savvy in expanding the company.

In addition to Buffalo Ridge, the collection includes another wholly community-owned establishment, Thakadu River Camp, and private investors and communal owners alike follow the environmental models that have been applied throughout the reserve. The story of Madikwe, like so many of South Africa’s game parks, is one of patient and passionate implementation of conservation programmes.

Through the decades-long Operation Phoenix, the area was restored from over-grazed cattle farming terrain to a self-sustaining wilderness area. Combining the twin appeals of being malaria-free and offering Big Five game viewing, Madikwe is a highly prized destination for those who can afford it.

Certainly, a stay there is not cheap.

But patrons of Buffalo Hills, Thakadu River Camp and Tuningi Safari Lodge – which has also been certified by Fair Trade in Tourism South Africa (FTTSA) – are reassured that the money they spend will have a positive ripple effect in the local economy.

And, in the case of the Balete of Buffalo Ridge, that doesn’t mean only a few individuals; it means training and employment for dozens of staff at the lodge and, equally importantly, it means the development of infrastructure in Lekgophung and surrounds.

While this doesn’t seem to be the kind of thing one associates with the excitement of game drives, the luxury of lazing by a pool overlooking pristine bushveld, or the privilege of drinking and dining under starry skies, it is possible for tourists to be self-indulgent and to support community development at the same time.