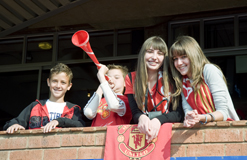 The world may be in the grip of an economic crisis, but this hasn’t stopped an increasing number of tourists from the UK visiting South Africa. The exchange rate, a number of major sporting events, anticipation of the 2010 Fifa World Cup and the country’s reputation as a value-for-money destination are some of the reasons more  British tourists choose to holiday in South Africa.

A major reason is because it’s cheap. According to tourism trade publication Travel Daily News International, the pound has fallen against most major currencies, but is at its most favourable level against the rand in years.  The publication reports that UK companies are seeing more travellers showing interest in visiting South Africa. UK tourists are more discerning when making holiday bookings, and affordable destinations such as South Africa are preferred.

Supporter turnout at the Lions tour matches in particular made it clear that the depressed economy hadn’t deterred UK fans. According to Dr Azar Jammine, director and chief economist at Econometrix, this is a good sign ahead of the 2010 Fifa World Cup.

“There was an unprecedented presence of supporters at the games and judging from this support, we could expect a lot more British tourists in South Africa for the World Cup next year,” he said. Although tour packages may have been arranged some time ago on even better exchange rates, he said supporter turnout was still unmatched.

Statistics up until March this year show negative growth of 5% to 10% in tourist arrivals in South Africa. But Jammine pointed out that these figures do not reflect tourist arrivals as a result of the Lions tour, the Confederations Cup and the Indian Premier League. The arrival figures up to the end of June are likely to show an even greater increase, he said.

Jammine added that the success of the Confederations Cup will also bring more people to the country next year. South Africa expects to attract more than 10-million holidaymakers in 2010, including some 3-million football supporters for the World Cup. With England qualifying for the tournament, a large percentage of visitors are likely to be from Britain.

Prof Ernie Heath, head of the Tourism Management Department at the University of Pretoria, said publicity and awareness of the recent sporting events made a good case for South Africa’s appeal as a holiday destination.

“South African Tourism and other tourism stakeholders have launched some excellent marketing campaigns in the UK,” he said. “These initiatives have ensured that South Africa, as a tourism destination, remains top of mind in the UK.”

Greater tourist interest in South Africa is also benefitting the property industry. Marcel Deacon, director and CEO of Susan Deacon Properties, said their company had received numerous requests from international visitors seeking property investment opportunities. “Most of them are so excited about our country after their first visit that they start searching for holiday homes,” Deacon said.

Deacon added that the ease of travelling to South Africa – the same time zone means minimal jetlag – as well as the weather and the country’s world-class golf courses attract visitors to the country. The exchange rate also makes it possible for foreigners to invest in property in South Africa. “Here there is no need to stay in a 60 square metre, two-bedroom apartment. They can afford homes with more space and luxury,” he said.

Heath pointed out that every tourist visiting the country, whether as a football supporter or someone visiting friends and family, is a valuable source of revenue.

“Every visitor brings ‘new’ money into the country,” he explained.  A significant component of the UK market to South Africa is repeat visitors as well as “VFRs” – visiting friends and relatives. Tourists in these categories stay for longer periods and visit a broader base of destinations, including the less frequented tourist areas.

According to Heath, one of the key challenges is to sustain the current boost in UK tourism in South Africa. The UK is one of the world’s largest economies – its gross domestic product is the seventh-largest in the world. At $US25 718 a year in 2006, the UK also has one of the highest disposable incomes per citizen, second only to the US. And it is the second largest long-haul market globally, after Germany.

“In spite of the fact that the UK is South Africa’s most important long-haul market, with 488 032 visitors in 2006, South Africa still only represents approximately 4% of the UK’s total long haul market,” Heath said. There is still plenty of opportunity for growth in the UK market for South African tourism.