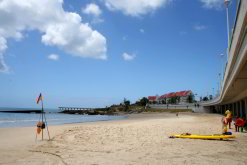 The pristine environment of Humewood
Beach has earned it Blue Flag status for
the coming season.
(Image: Emily van Rijswijck)

Holidaymakers heading for South Africa’s coastline can look forward to 27 Blue Flag beaches to choose from when the summer festive season gets underway in December.

The latest beach to receive Blue Flag status is Humewood in Nelson Mandela Bay Municipality. Another 14 beaches in the country have applied for a developmental or pilot stage in Blue Flag status.

Blue Flag Beach status is awarded every year for a specific period, depending on the season when the beach is visited the most.

The accolade is awarded only after rigorous judging by a South African and international Blue Flag jury, and indicates that these beaches have met standards in excellence in the areas of safety, amenities, cleanliness, environmental information and environmental management.

Throughout the period that a blue flag is flying on these beaches, visitors can be sure that the stringent standards apply and are upheld.

In South Africa, the six sub-tropical beaches of KwaZulu-Natal have a year-long Blue Flag status while the more temperate to colder waters of the Cape beaches only have Blue Flag status for two to four months during the peak summer holiday season.

At the end of the season, lifeguards, cleaners and security staff go off duty and visitors should not expect these services to be in place.

In addition to the country’s beaches the Blue Flag programme will in future also include marinas, with three marinas in Cape Townand one in Port Alfred looking to achieve pilot status in the forthcoming season.

Tourist leisure craft may also apply for Blue Flag status. The Dyer Island Conservation Trust‘s Whale Whisperer, a whale-watching craft, has received a pilot Blue Flag for the environment-sensitive manner in which it undertakes its activities.

In South Africa, the programme is co-ordinated by the Wildlife and Environment Society of South Africa (Wessa) through its National Coastal Project, which in turn resides within Wessa’s Water Programme.

In 2001 the country became the first outside Europe, where the Blue Flag programme originated, to implement its own programme.

This year’s national Blue Flag beach season, running from summer 2011 to summer 2012 was officially launched at the Eastern Cape resort of Kenton-on-Sea, near Port Alfred, by Rejoice Mabudafhasi, the deputy minister of Environmental Affairs.

“The success of the Blue Flag programme in South Africa over the past 10 years can be attributed to the commitment of participating municipalities to provide beach-goers and holiday-makers with world class beaches,” she said, speaking at the event.

The beach at Kenton-on-Sea has had Blue Flag status since 2009.

The same commitment has been shown by the Nelson Mandela Bay Municipality who worked hard to restore its Blue Flag status for Humewood beach. This is the view of Morgan Griffith, Wessa’s conservation officer in the Eastern Cape, who handed over the flag to the municipality on 1 November.

In 2001 Humewood Beach became the first local beach to receive Blue Flag accreditation. It lost its status as a result of logistical problems when too many people flocked to the beach and insufficient numbers of lifeguards were present, breaking one of the important requirements for a Blue Flag beach – that of safety.

Griffith says the role of Wessa, as overseer of the programme, is not to police, but rather to help municipalities to get to grips with real environmental management of their marine areas, and to sustain this for the greater benefit of the community and the economy in the long run.

“One of the effects of Blue Flag status is that it brings about real economic benefits, boosting tourism,” he said.

Research has shown that the investment coastal municipalities make in meeting and sustaining the international standards of Blue Flag accreditation pays off.

South Africa’s domestic tourists are increasingly choosing Blue Flag beaches as their destination of choice, and in so doing, mirror trends that have been seen in Europe and Scandinavia on their Blue Flag beaches.

Mandela Bay Tourism acting CEO, Cheryl Witte. says the area has about 80 kilometres of unspoilt beaches, with the addition of the Humewood beach as a Blue Flag beach now becoming a real marketing asset for the city.

Port Elizabeth has boosted security around the beach area and lifeguards will be on duty at all times during the Blue Flag season, which runs from November to April. The beach’s water is also tested every two weeks by an independent laboratory.

Blue Flag criteria are set by the Foundation for Environmental Education, a non-profit organisation promoting sustainable development through environmental education.

The Blue Flag programme is one of its five key projects and is actively pursued in 44 countries worldwide. There are now almost 3 650 Blue Flag beaches and marinas around the world.