The development of the Bloodhound supersonic car, seen here in model form, is expected to attract youngsters to careers in maths, science and engineering. 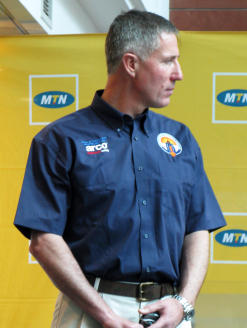 Andy Green, who will steer the Bloodhound SSC to a new land speed record, is passionate about the educational aspects of the project.
(Images: Janine Erasmus) 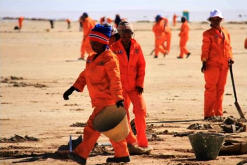 A workforce from the Mier community has been working on clearing the surface of Hakskeen Pan for about three years now.
(Image: Bloodhound SSC)

There’s more to the Bloodhound SSC than just mind-boggling speed – the project is aimed at inspiring a new generation of scientists and engineers, and a Northern Cape community is benefiting through job creation, better communications infrastructure, and tourism.

The Bloodhound SSC (supersonic car) land speed record attempt will take place in 2015 in the Northern Cape at Hakskeen Pan, a dry lake bed about 200km north of Upington.

“The car is being built in the UK, but this is a South African event,” says Wing Commander Andy Green of the Royal Air Force.

He’s the world’s fastest man, and driver of the Bloodhound SSC. Oxford mathematics graduate Green was the first and so far, the only person to break the sound barrier on land – in 1997 in Nevada’s Black Rock Desert, driving the Thrust SSC, he set a speed of 1 228 km/h (763 mph).

The record still stands today – but not for long. If anyone can break Andy Green’s record, it’s Green himself.

The daredevil is visiting South Africa as a guest at the 2013 Scifest Africa, taking place in Grahamstown from 13 to 19 March under the theme Science on the Move. He’ll be introducing Bloodhound SSC as “An Engineering Adventure in South Africa” and talking about the technology, the preparation of the track, and the educational component of the project.

Designed by project director Richard Noble, the Bloodhound SSC will reach a top speed of 1 610 km/h or 1 000 mph. The speed of sound on land is generally taken to be around 340 m/s or 1 236 km/h. This does vary with temperature.

“This is faster than any fighter jet can travel at ground level,” says Green.

One of Bloodhound SSC’s main goals is to inspire a new generation of scientists, mathematicians and engineers.

“We need skilled people to solve the world’s problems,” says Green. “The solutions are there but do we have enough scientists to look after our future? We want to get kids interested in science, and excited about the fact that they’re getting science lessons in school.”

The car is scheduled to arrive in South Africa for test runs in April 2014, which is later than previously announced but, says Dave Rowley, the project’s education director, it will give the team time to reach more schools.

“We have 200 local schools signed up for our education programme,” Rowley says, “and 49 ambassadors who reach out to children from Grade One right up to university level.”

The ambassadors visit these primary, secondary and tertiary educational institutions and promote not only the project, but also engineering, technology, maths and science.

“They are crucial to our project,” Rowley says. “If we can make science more exciting in the classroom, it will change the face of education.”

All data generated by the project, including research, design, manufacture and testing stages, are available to teachers and students of registered schools around the world.

The core development team is the same as that which worked on Thrust SSC, says Green, but they have more powerful computers this time around. Safety is foremost in the minds of everyone involved.

The propulsion system and body are being built separately.

Bloodhound SSC is powered by a borrowed Eurojet EJ200 aircraft engine and a Falcon hybrid rocket engine, with a Cosworth CA2010 Formula One engine as the auxiliary power supply. The engines together produce around 135 000 horsepower and will allow the car to cover the 20 km distance in two minutes.

The EJ200 is taken from a Eurofighter Typhoon fighter plane and works on the same principle as an internal combustion engine. It will be the first engine fired up and will get Bloodhound SSC to an initial speed of about 563 km/h.

The Falcon, which was originally planned to be the only power source, will kick in at this time, and the two together will boost the car up to 1 689 km/h in a mere 55 seconds, subjecting the driver to about 2g of force. This engine is a hybrid because it uses a solid synthetic rubber, Hydroxyl-Terminated Polybutadiene (HTPB), as its primary fuel, with a liquid oxidiser and a catalyst to ignite it.

The Cosworth engine drives the rocket motor’s fuel pump, which can deliver 800 litres of hydrogen peroxide – the oxidiser for the HTPB in the rocket – to the engine in just 20 seconds.

This hybrid approach will allow Green to shut off the oxidiser if necessary, extinguishing the rocket engine. Although the system is still in an early stage of development, in October 2012 the team ran a successful test-firing event. The Cosworth engine reached 16 600 rpm during the test, producing enough pressure to fill a bath in five seconds.

To withstand the forces produced by these powerhouses, Bloodhound SSC’s body has to be extraordinarily robust.

The driver sits within the carbon fibre part, which provides a rigid reinforced structure for added safety. His seat is fireproof.

The four wheels are made from solid aluminium, each weighing 95 kg and measuring 910 mm in diameter. Two are housed internally in the front and the two rear wheels are mounted outside the body.

It will take a three-step braking system to safely stop this speeding projectile. The airbrakes deploy at 1 287 km/h, followed by the release of a parachute at 965 km/h and finally the rear wheel brakes can be used at 322 km/h. Green will experience about 3g of force during deceleration.

When fully fuelled the car weighs about 7 800 kg. The total development costs are estimated at around R320-million (US$35-million), all of which is funded by sponsors.

Green is confident and enthusiastic about the run. “It’s actually quite safe,” he says. “If all the factors are in place, nothing bad will happen. The car is built to be super-strong with the same safety margins as an aircraft. The aerodynamics are also key – we don’t want the car to lift off and that’s why it’s great that we have the experience of the people who worked on Thrust.”

The youngsters will only be impressed with success, he says – “so we have to do it right.”

Green anticipates some 30 test runs at Hakskeen during 2014, followed by the record attempt in 2015. “After testing we’ll take it back and make whatever modifications are necessary, then return in 2015 – so the kids will get two seasons of Bloodhound.”

Communicating with the world

Another essential component of the project is communications. To allow the control team to accurately monitor the conditions in the car in real time, the speed of data transmission must be as fast as possible.

Local mobile provider MTN is the official telecoms partner. The company will be using long-term evolution (LTE) technology to transmit video, audio and data from the car to Upington and then the world, and will install R30-million ($3.3-million) worth of new infrastructure at the pan.

Krishna Chetty, the GM for radio optimisation and planning at MTN, says: “Our LTE network for on-car video and diagnostics will upload data at about 600 km/h.”

MTN will also provide 3G/HSPA 900 Mhz coverage for visitors and media at the pan.

The nearby indigenous community of Mier is responsible for preparing the surface over which Bloodhound SSC will hurtle. The team has nothing but praise for their efforts.

“The Northern Cape government has employed a workforce over the last three or four years to clear the surface of the pan. Their work has been outstanding,” says Green. “They’ve prepared the world’s best race track for the world’s fastest car with an attitude of excellence, to show the world that they can do this thing, and do it well.”

The 300-strong team has cleared six tons of stone from more than 20-million square metres of the pan’s surface, producing a track that’s 20 kilometres long and 1.1 kilometres wide.

Using a programme designed by Swansea University to sift through satellite imagery, and after numerous visits to survey potential sites, the pan was selected as the best site out of about 20 000 possibilities around the world.

“The community has completely embraced the Bloodhound,” Green says. “When team members visit the site they ask us ‘Where’s our car?’ They’re very proud to be involved.”

Unemployment in the community stands at about 96%, but with increasing interest in the Bloodhound project, it is hoped that tourism in the area will grow, with a knock-on benefit for the people. Already the first Kalahari Speedweek in 2012 brought hundreds of speed freaks to Hakskeen to test their vehicles on a five-kilometre track near to the Bloodhound site. The presence of the Bloodhound during the next two visits will swell the numbers of visitors significantly, but anyone can visit the pan in the meantime.

The community will also benefit from the cutting-edge communications infrastructure.

There are other South African contributions, and Green commends those too. “A company here built a bespoke trailer with aluminium wheels that we can use to test the interaction of the wheels on the track.”

Once the track has been cleared it will be scanned with a laser to check for bumps and inconsistencies, and graded to be utterly smooth and level.

“These contributions will allow us to correctly set the suspension up ahead of time.” 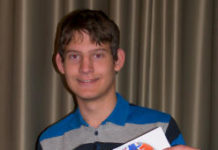