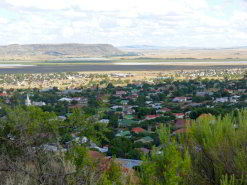 The small town is centrally situated in
South Africa and is of great importance to
both nature lovers and history buffs.
(Image:  Bethuliet) 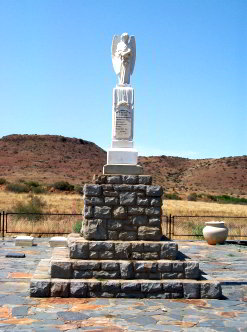 Often described as the “undiscovered gem of the southern Free State”, the small town of Bethulie slumbers on the northern bank of the Orange River where the water course marks the border between the country’s Eastern Cape and Free State provinces.

Bethulie is centrally situated in South Africa, about 800km from Cape Town, 600km from Johannesburg, and 500km from both Port Elizabeth and East London, making it an interesting and relaxing stop-over spot for long-distance travellers.

However, with its many historical and natural attractions, the town – situated on the shores of Lake Gariep (Xhariep is San, meaning “great water”) and surrounded by farms and game reserves – is well worth a visit in its own right.

Bethulie boasts the longest bridge in South Africa – the 1.152m rail and road DH Steyn Bridge – and was immortalised in actor Patrick Mynhardt’s autobiographical book Boy from Bethulie, which spawned a successful one-man show. Mynhardt died in London in 2007, during a run of the play at the West End’s Jermyn Street Theatre.

On the natural front the area is rich in ancient rock art and fossils, some of which date back over 250-million years, and the remains of creatures such as the lizard-like Procolophon, and Lystrosaurus which was about the size of a pig, have been found.

But the picturesque town’s quiet character of today belies a turbulent history that includes being the site of both a ferocious early tribal battle and the most notorious of the concentration camps established by the British to imprison mainly Boer women and children during the Anglo-Boer War of 1899 to 1902.

Its evolution over the years also saw Bethulie undergo more name changes than any other town in South Africa, after first starting out as a mission station established in 1829 by the  London Missionary Society at what was then known as Groot Moordenaarspoort (Afrikaans, meaning “great murderers’ pass”) – a reference to the tribal battles’ heavy toll.

In 1833 the mission station was transferred to the Paris Evangelical Missionary Society under the leadership of the Reverend Jean Pierre Pellissier. Two more name changes followed before the society directors decided to give the station the biblical name of Bethulia (widely believed to mean “chosen by God”), which later became Bethulie.

When the town was finally proclaimed in March 1863 it was with the name of Heidelberg. But with two towns of that name already in the country, it was later decided to revert to the mission station’s name.

The original mission station buildings still exist, including the oldest house built by European settlers in the Free State.

But it is its history as the site of one of the largest and worst of the concentration camps built by the English during the Anglo-Boer War that has perhaps left the deepest impression on Bethulie’s psyche.

However, this short, sad chapter in its life is also seeing the town attract new interest and energy as concerned residents, historians and other role-players work to ensure that this history and heritage are rightfully preserved.

Among them is Trudie Venter, former library senior director at the University of the Free State in Bloemfontein, who retired to Bethulie a few years ago.

Venter, who grew up on a farm in the area and has close family and other ties with the town, is passionate about Bethulie and its history, and is an expert on the Anglo-Boer War. She has established a private information centre in the town, from where she freely shares her knowledge.

At a conference of Anglo-Boer War historians, heritage bodies and other interested parties held in Bloemfontein – the major city closest to Bethulie, about 180km to the north –  in South Africa’s heritage month of September, Venter spoke on the Bethulie concentration camp and had the honour of unveiling an eighth monument to it, at Bloemfontein’s Anglo-Boer War Museum.

The aims of the conference were to commemorate the concentration camp system that was initiated 110 years ago by the English during the war; to look at the history of the camps and the suffering of their inhabitants; and, with the preservation of many heritage sites under threat due to a lack of funding, to identify individuals and strategies to assist with the challenge of conserving and maintaining the various concentration camp sites and cemeteries in the country.

“Much of our heritage will be neglected and ultimately lost unless communities themselves become involved and take steps to prevent this,” says Venter.

She added that the conference was about people with passion coming together to establish a formal structure through which focused, collective and collaborative action could be taken. The South African Heritage Resources Agency, the Heritage Foundation, KwaZulu-Natal provincial heritage conservation agency Amafa and the Commonwealth War Graves Commission were among the organisations represented at the conference, which looked at conservation strategies from an international right down to a local level.

Known even by the English as “the hell camp” due to the shocking conditions caused largely by bad administration, the Bethulie concentration camp saw 1 737 deaths among its population of about 5 000 in the 13 months from its establishment in April 1901 until peace was declared in May 1902, says Venter.

The ravages of disease, starvation and extreme temperatures resulted in an average of 30 people being buried daily, and “there isn’t a farm in the area that was not affected by the war”, often through the British scorched-earth policy of burning homesteads and lands so as to destroy the Boer fighters’ support base.

A visit to the concentration camp cemetery just outside the town is an evocative experience. The names of all the camp’s victims are inscribed on long granite slabs, and a statue of an angel stands sentinel over the graves which were relocated from their original site closer to the river due to fears of flooding when Lake Gariep (then the HF Verwoerd Dam) was built in the 1960s.

The original, simple hand-carved sandstone headstones – which now provide a record not only of the fallen but also of the folk art of the time and the new language of Afrikaans that was starting to emerge – have been set into walls at the far end of the monument. Reading them gives a clear indication of the heavy toll the camp exacted, especially on very young children.

The town’s cemetery provides another sobering record of the victims of the war and includes the graves of 32 British soldiers, maintained by the Commonwealth War Graves Commission.