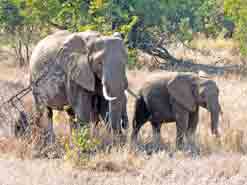 Addo’s African elephnats now have more
room to roam, with the historic dismantling
of a large section of fence.
(Image: MediaClubsouthafrica.com. For
more free photos, visit the image library)

Domkrag the mighty tortoise takes on a
car in the 1950s.
(Image: Tortoise Trust)

The hefty residents of the Addo Elephant National Park in the Eastern Cape can now move about more freely after a length of fence was removed between two sections of the park.

The 4km-long piece of fence between the Colchester area in the south and the main game area to the immediate north, was enthusiastically brought down in August 2010 by volunteers, rangers and other workers, resulting in a whole new 24 000ha for animals to explore.

The historic dismantling will now enable animals to move down to the Colchester area, which has undergone upgrades worth R45-million (US$6.2-million) in total on roads, fencing, wildlife introduction, a new rest camp and other maintenance.

The elephants will in effect be returning to the same parcel of land that harboured the original surviving group of 11, before Addo was proclaimed in 1931.

The Addo Elephant National Park is an important tourism drawcard for this region, and reported an increase in visitors and occupancy during 2009. Like all but three of South Africa’s other national parks, entry into Addo is free during National Parks Week 2010, which runs from 13 to 17 September.

“National Parks Week provides us with that much-needed opportunity to establish a real multicultural visitor profile and also assist in the development of a deep sense of national pride, which will subsequently result in building stronger constituencies and ambassadors of conservation and the environment through affordable local holiday destinations,” said Minister of Environmental Affairs Buyelwa Sonjica, during the launch of the week-long event in Addo earlier in September.

Addo, which is located near the Sundays River that runs along its western flank, is managed by the South African National Parks authority (SANParks). It was proclaimed to protect the region’s elephants, which had almost been wiped out by farmers and ivory hunters during the 18th and 19th centuries. By the time the park came into being, only a handful of the magnificent beasts were left.

However, confrontations between farmer and elephant continued until the construction of an elephant-proof fence in 1954, which was developed by then park manager Graham Armstrong, and named after him.

Interestingly, citrus fruit is forbidden in Addo’s game-viewing areas, as the elephants have developed a craving for them over the years. Because the cruelty of hunting had left the survivors aggressive and frightened, rangers fed them truckloads of oranges in an attempt to pacify them during the park’s early days. Now a single whiff could lead to disaster, as they are powerful enough to destroy a car – and its occupants – in an attempt to reach their favourite fruit.

Originally 2 000ha in area and 2 270ha after fencing, today the park extends over 164 000ha. From the initial population of 11, elephant numbers have now risen to more than 450, making this one of the most concentrated populations of African elephant (Loxodonta africana) on the continent.

An even bigger expansion of the park is in the planning, and will see the area grow to 360 000ha. An additional 120 000ha marine reserve is also to be proclaimed.

Addo is home not only to the mighty tuskers that give it its name, but also to the industrious Addo flightless dung beetle (Circellium bacchus) which is unique to the area, black-backed jackal, various antelope species, the vulnerable Cape mountain zebra (Equus zebra zebra) and critically endangered black rhino (Diceros bicornis).

Like other South African reserves, the park is a natural treasure, with five of the country’s seven biomes found within its borders. These are the Albany Thicket, Fynbos, Forest, Nama Karoo and the Indian Ocean Coastal Belt.

With its large stretch of Algoa Bay coastline, marine conservation is a priority. According to Addo management, the park incorporates the largest coastal dune field in the southern hemisphere. The southern right whale and the great white shark, along with the lion, leopard, buffalo, rhino and elephant, comprise the so-called Big Seven.

Addo has produced a few creature characters over the years. One of them was the 43kg Domkrag, the giant leopard tortoise. Domkrag (Afrikaans, meaning “jack”) was big and strong enough to physically lift up cars by crawling underneath them, hence his name.

Another famous Addo animal was Hapoor the elephant, who ruled the reserve for 24 years. Hapoor (Afrikaans, meaning “nicked ear”) was not fond of humans, who are suspected of having caused the hole in his ear with a bullet. He was known for terrorising staff and visitors, and is renowned for being the only elephant to conquer the Armstrong fence.

Both are deceased now, and Domkrag’s shell and Hapoor’s head are both on display in the Addo main building. Their names live on in the Domkrag Dam and the Hapoor watering hole.

Addo also contains a number of interesting archaeological sites, including rock art in the Zuurberg caves and remains of the nomadic Strandloper (Afrikaans, meaning “beach walker”) people, who roamed the area during the Later Stone Age – between 40 000 and 10 000 years ago.