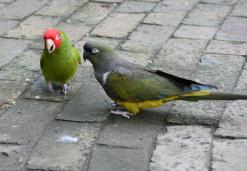 This red masked and Patagonian conure are best friends. 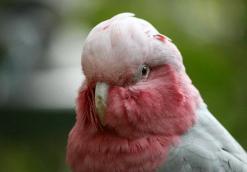 A native of Australia, the delicately coloured Rosie, a galah cockatoo, has settled into life under the Birds of Eden dome. 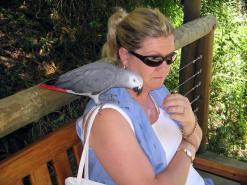 Although all the birds have been dehumanised, many of them are still fearless when it comes to human interaction. 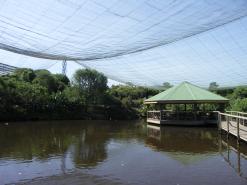 The mesh dome covers a surface area of over two hectares and is 55m off the ground at its highest point. 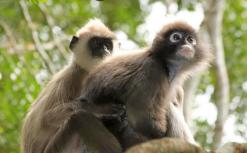 Calik the spectacled langur and his lady friend, a Hanuman langur, are two of the tiny primates that have found sanctuary at Birds of Eden.(Images: Birds of Eden)


The Birds of Eden avian sanctuary, located 16km east of Plettenberg Bay on the picturesque Garden Route in the Western Cape, is the biggest single-dome free flight aviary in the world. It’s a home and a haven for exotic birds and miniature monkeys who would otherwise struggle to survive in the wild.

Situated in Eden Municipality – hence the name – the sanctuary opened in December 2005 and is a popular attraction on the Garden Route.

However, it also offers an important service in that it accepts previously caged birds and tiny monkeys whose owners want to give them a better life.

The creatures live under a wire mesh dome which covers over 2.3 hectares of lush indigenous forest, with a volume of over 375 000 kilolitres.

To more easily visualise the dome’s surface area, imagine an international rugby field, which has a total playing area of roughly one hectare including the area behind the dead ball line. Then imagine two and a half rugby fields next to each other. In volume terms, a kilolitre contains 1 000 litres.

At its maximum height the dome soars 55m above the ground, giving the birds plenty of room to fly. It’s supported by a network of cables running between 28 masts which vary in height between 2m and 34m. According to Birds of Eden, the mesh and supporting structures weigh about 80 tons.

The dome encloses a dam for waterfowl and a gorge with a waterfall. The forest vegetation is Afromontane, and includes tree species such as Ironwood olive (Olea capensis), the Outeniqua yellowwood (Podocarpus falcatus), the black (Ocotea bullata) and white (Celtis african) stinkwood, and the Cape beech (Rapanea melanophloeos).

Bird lovers may opt to take the official guidebook and wander through the dome on their own, over some 1.2km of walkways, or as part of a guided tour. The majority of walkways are elevated, so visitors can get close to birds perching in trees.

Birds of Eden is affiliated with the next-door Monkeyland primate sanctuary, and both are run under the South African Animal Sanctuary Alliance, previously known as the Touch a Monkey’s Heart Foundation.

Monkeyland operates on much the same principles with its four-legged charges, although there is no covered dome but rather a 6.5m-high electrified fence surrounding the 12ha of primate paradise.

Some monkey species, such as tamarins and marmosets, are too small to be released into the larger sanctuary, and these are the ones who’ve found a home next door with the birds under the dome.

Among Birds of Eden’s 204 different species are waterfowl, louries, toucans, macaws and parrots, lorikeets and parakeets, cranes, flamingos, starlings and robins – but no raptors.

There are over 3 500 individual birds in the dome, which is also home to leopard tortoise, several species of snake, little duikers, and other creatures.

“We take previously caged birds, mostly exotics,” says Lee Dekker, manager of the sanctuary. “African birds can in many cases be released, but birds that originate from further afield simply won’t survive in the wild.”

Birds are also taken in after SPCA confiscations, or may come from zoos or experimental facilities.

In the pre-release stage, which can take many months, the birds are dehumanised, put onto the right diet for their species, and allowed to socialise with others in a large aviary. Here they can also build up their flight muscles, especially if they’ve had to sit on a perch in a cage for a long time.

“When we receive a bird we do a health test so that we know what we have to do to get it flying fit,” says Dekker. “The birds are put onto a natural diet and are closely monitored after their release.”

Most birds are easily able to recognise their own kind but, says Dekker, some have made friendships across the species divide.

Their natural instincts are also unimpaired – when they get released into the main dome, it doesn’t take them long to find the spot that’s exactly suited for them.

Over the years, many colourful characters have found their way into the hearts of staff and visitors.

One of these is 38-year-old Meisiekind, a Catalina macaw, who has lived in cages for most of her life. Meisie was frustrated with her circumstances and when her owners had a baby, the bird became angry that she wasn’t getting all the attention, which added to her temper problem. Finally, she bit her rival’s finger off and while surgeons were able to reattach the child’s finger, the macaw had to go. Birds of Eden was the answer.

Rosie the galah cockatoo is another celebrity bird. Australian in origin, the galah is one of the most common and widespread of Australian birds. True to her name, Rosie is pink and grey in colour and is a confident and friendly bird, often greeting visitors by asking, “Hello, what’s the time?” It took 18 months to get Rosie ready for release into the dome, but she has settled in and is now familiar with all parts of her new home.

Before any of these creatures can be released into the dome or the larger enclosure, they have to be able to find food and shelter on their own and be able to fly or move around with confidence. Feeding platforms throughout the forest offer a selection of seeds, fruit, vegetables and nuts, and the birds and monkeys have to learn firstly that the platforms exist and secondly, how to find them.

But thanks to the Eden Syndromw, says Dekker, Birds of Eden has never had a failure. 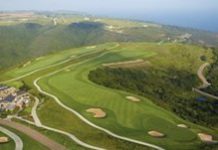 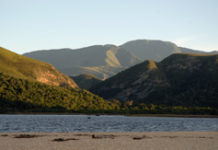 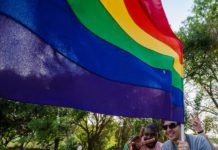