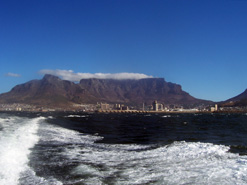 A view of Table Mountain from the
ferry to Robben Island.
(Image: Mary Alexander,
MediaClubSouthAfrica.com. For more free
photos, visit the image library)

While splurging on overseas holidays may not be on everyone’s to do list in the current time of economic uncertainty, UK tourists are getting out and about more than ever and, if they could choose the best city in the world to visit, it would be Cape Town.

According to a travel survey taken by more than 25 000 readers of UK papers The Daily and Sunday Telegraph, Cape Town gets the nod for best city in the world, beating the likes of Sydney, Australia and San Francisco, USA. South Africa was also voted the third best non-European country and the Mount Nelson Hotel takes the same spot for best hotel.

What’s not to like about Cape Town? It’s clean, beautiful, home to sunny beaches, modern, cultural and vibey. According to the popular travel website, www.tripadvisor.com Cape Town is “the City that glistens at the southern toe of the African continent”. It elaborates on the amazing tourist attractions from Robben Island to the top of Table Mountain, which offers picturesque views of the City Bowl and seemingly never ending ocean. In the websites inaugural Travellers Choice Destination Awards this year, the City was awarded the best destination in Africa.

And the praises are not limited to English visitors. One tourist from Nairobi had plenty to say on the website about his experience on Table Mountain, “I had the best time bringing in 2008 on the top of Table Mountain. It was my first trip to there and I was not disappointed at all! Despite the crowds service was good – and fast! From the top: the city lights and watching the fireworks over the waterfront was stunning….like jewelled necklaces on black velvet.”

Of course it’s not just the mountain that attracts visitors. There are the 72 pristine beaches around Cape Town, which are popular with locals and tourists, the pulsating nightlife with trendy bustling bars, eclectic and multi-cultural art exhibitions and shopping areas of malls and flea markets.

Cape Town has been attracting millions of visitors since the country’s breakthrough democratic change. In 1994, fewer than 600 000 tourists visited South Africa per year, but with improvements to the country on all fronts South Africa recorded just over nine million foreign arrivals in 2007, and is well on its way to welcoming the 10-million international visitors the government intends on attracting in 2009.

Interest in the country has increased further ahead of the Fifa 2010 World Cup and preparations are underway country wide to prepare for the three million visitors that are expected to arrive just for the event.

During the country’s peak season months between November and January, Cape Town alone anticipates more than one million visitors. To cater for their expectations, the City of Cape Town this year set up a holiday coordination committee that will see a number of departments including police, fire and rescue services, traffic authorities and sport and recreation groups focusing on making every visitor’s stay a pleasure.

“The City of Cape Town extends a warm welcome to all visitors. It will do its best to enhance their stay and ensure their safety. At the same time we appeal to visitors and residents to help keep the City clean and safe during the holiday period,” Dumisani Ximbi, Mayoral Committee Member for Safety and Security.