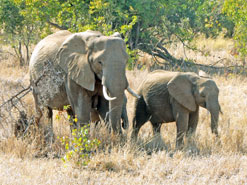 Elephant numbers are on the rise in
the Kruger Park, as are the other
Big Five populations.
(Image: MediaClubSouthAfrica.com. For
more free photos, visit the image library)

South Africa’s world-famous Kruger National Park is proving to be an ideal breeding ground for its animals, with the Big Five populations increasing steadily, and no large mammal species under threat.

The announcement was made by Minister of Environmental Affairs Buyelwa Sonjica. The minister was replying in writing to a question tabled in Parliament in mid-June.

The Kruger Park, which is managed by South Africa National Parks (SANParks), has experienced ample rainfall over the last 15 years, and it is this that has produced the increase in animal numbers. However, this is part of the inevitable cycle of life and, said Sonjica, when the park enters its next dry phase the numbers will drop off naturally.

The type of vegetation varies in different parts of the park, ranging from Sabie Thorn Thicket in the south, to Lebombo Mountain Bushveld in the east, Mopane Woodlands in the central region, and Mopane Savannah in the north, with a host of others in between.

Sonjica stated that no large mammal species was threatened. Africa’s popular Big Five – lion, leopard, elephant, rhino and buffalo – were also doing well and in fact, numbers of the latter three species were increasing at between 4% and 7% a year.

The rare black rhino population is showing an even more robust increase, at 7% per year. There are an estimated 590 to 670 black rhino, which are listed as critically endangered on the red list of the International Union for the Conservation of Nature, in the Kruger Park.

The near threatened white rhino is also thriving, with the population growing at 11% a year. There are an estimated 9 460 to 12 120 white rhino in the park.

Both rhino species have fallen prey to poachers in recent times – of the 92 rhino said to have been poached in South Africa since the beginning of 2010, 33 were in the Kruger Park.

Elephant numbers are also increasing steadily, at around 4% a year since 2004. In 2000 there were 8 350 individuals, and the latest figure puts the population at an estimated 13 700.

Lions number between 1 620 and 1 750. It is much harder to provide an accurate assessment of the leopard population. The mysterious cat is rarely seen, and Kruger Park staff have had to resort fo using older data to extrapolate the current figure. They’ve come up with a figure of 1 000 individuals.

Sonjica’s data reveals that other popular animals are gaining ground. They include the elegant giraffe, which have increased in number to between 7 090 and 10 950; Burchell’s zebra, which number between 20 870 and 33 240; and impala, which number around 125 000.

The Kruger Park’s official website provides estimates, calculated between 2008 and 2009, of mammal populations: