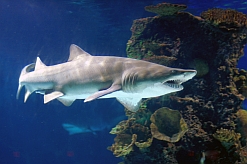 Grant Smith and his uncle Trevor Krull used to run a shark tourism operation in Protea Banks, KwaZulu-Natal, a few years ago.

They regularly took local and international scuba divers out on deep sea shark dives and became well-acquainted with the Zambezi and spotted ragged-tooth sharks that lived among the rocky reefs, naming the regulars and welcoming the raggies back from their winter stay in the Eastern Cape.

Diving with sharks brought a sense of close interaction with nature, which Smith likens to viewing a lion in a game park from the safety of a vehicle. It is “something very special” to see how animals approach each other under water or to have a large predator swimming straight up to you, he says.

However, back on land he often had to witness fishermen cutting out the jaws of the sharks he knew so intimately. Appalled and distressed by this practice, Smith and Krull decided to start Sharklife, a not-for-profit organisation that actively addresses the exploitation of sharks and ocean fisheries in South African waters.

Smith says there is little scientific data on the shark life in South African seas, but anecdotal evidence paints a healthy and diverse picture.

However, he says there is no legislation in place to prevent the hunting to near extinction of unprotected shark species, such as the large ragged-tooth sharks and stocky Zambezi or bull sharks, as recreational fishing permits currently allow fishermen to kill up to 10 different sharks a day.

He says the organisation would like to see legislation in place that prevents the same occurrence as in Australia where “everybody wanted to kill a raggie in the eighties”, leaving only a couple of hundred ragged-tooth sharks to live and breed in their national waters – a number too low to achieve any replacement of the tens of thousands that were lost.

“You can’t make this mistake,” says Smith. “We only have one shot at saving them.”

One of Sharklife’s most pressing projects is the protection of pregnant ragged-tooth sharks (Carcharias taurus) in KwaZulu-Natal’s Isimangaliso Wetland Park, formerly the Greater St. Lucia Wetland Park. This famous area was South Africa’s first World Heritage Site, and here pregnant females relax in the warm water from December to March during their gestation period.

The protection of these sharks is also important for marine tourism in the area, which sees 66 000 to 100 000 deep sea dives per year in Sodwana Bay, located within Isimangaliso. Divers come here from all over the world to mingle with raggies and other sharks.

Smith feels it is a “glaring oversight” that the pregnant raggies can legally be hunted in the bay at a rate of one shark per day, but he says the Isimangaliso Park Authority has recently committed to the drafting of new regulations to protect these animals.

Sharklife will continue to canvass for the new regulations until they are signed into law.

While there has been a massive increase in global awareness of sharks over the last five to six years, Sharklife also runs education programmes aimed mainly at divers, to raise their level of knowledge and understanding of sharks. Next year the organisation is planning to launch e-learning courses aimed at the overseas market.

Further south, approximately 100 000 white shark cage dives take place every year in locations around Gansbaai, a coastal resort near Hermanus in the Western Cape, and in False Bay near Cape Town. Divers pay R1 000 (US$145) for the thrill of one dive amongst the marine predators.

Smith says there is growing interest in shark diving in South Africa from adventurers around the world. This is due to the country’s diverse shark life, its geographic accessibility, and the consistency of shark sightings in our national waters.

Shark diving not only serves the tourism industry, but also contributes to conservation since it helps to teach people about sharks and their behaviour.

As Smith says, “It changes people’s perceptions of sharks from ominous to magnificent.”