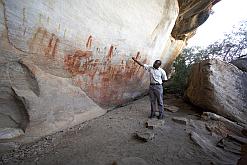 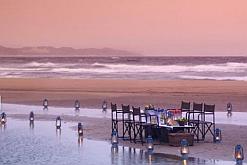 A romantic moment on the beach at Phinda.
(Image: Phinda Private Game Reserve)

Of the 50 establishments recognised as the most earth-friendly, 17 are in Africa. Four are in Kenya, with two each in Namibia, Botswana and Tanzania, and one each in Mozambique, Seychelles, Egypt and Morocco.

National Geographic Adventure says that a decade ago the number of true ecolodges on the planet could be counted on two hands. But no longer are they solely found deep in the African bush or Central American jungle, as these are not the only ecosystems that need nurturing. Today ecolodges are found in a diversity of landscapes and locales ranging from island and savannah to mountain and desert terrain.

As far back as 1990 the Ecotourism Society defined ecotourism as “Responsible travel to natural areas that conserves the environment and improves the well-being of local people”.

And an ecolodge, according to the Ecotravel Center, a division of the non-profit Conservation International Foundation, can be defined as a nature-dependent tourist lodge that meets the philosophy and principles of ecotourism.

Ecolodges, therefore, are those establishments that focus strongly on a greener way of operating, including the support of local communities, the creation of far-reaching conservation initiatives, and a firm emphasis on adventure. Oh, and guests can expect dazzling locations and unsurpassed service and comfort too.

A good ecolodge should engage in responsible practices such as paying respect to local traditions by incorporating cultural elements into the design and décor, disrupting the natural environment as little as possible and using local plant life as much as possible, sourcing food from local farmers, using recycled or recyclable materials in building, and bridging cultural gaps by promoting cultural exchanges.

Ecolodges are becoming increasingly fashionable, not only because many of them genuinely deserve their place among the world’s top destinations, but also because more tourists are listening to their consciences and actively supporting the vital role that ecolodges play in conservation. These fine citizens of the earth will return home knowing that their holiday contributed to preserving the world’s natural environment.

In South Africa, the three establishments that have been singled out by National Geographic Adventure magazine have shown firm commitment to those ecotourism principles.

The Tswalu Kalahari Reserve is the creation of the late Manchester entrepreneur Stephen Boler, who was at one time the largest single shareholder in Manchester City football club. Over a period of four years Boler bought 34 farms in the Kalahari Desert and combined them to form a vast 1 000km² game reserve. Since 1999 Tswalu, the largest private reserve in South Africa, has been owned by the Oppenheimer mining dynasty.

Tswalu has won a number of international awards, including several AA Travel Guide accolades and a Condé Nast Traveler 2007 World Savers Award. While it offers a superb safari experience, its primary aim is conservation and socio-economic development in the region. Its architectural designs minimise water and energy usage while extensive use of solar energy and everyday waste recycling substantially reduce the impact on the environment.

Tswalu is committed to restoring and preserving the natural environment and ecological processes that are unique to the Kalahari ecosystems, thereby providing a sanctuary for endangered species such as the African wild dog, listed on the International Union for Conservation of Nature’s Red List.

Some of Tswalu’s projects include a study of the mammals in the reserve and identification of their ecological roles, research into predator-prey relationships of the Kalahari lion in the reserve, a determination of the density of black rhino that can be sustained by vegetation in Tswalu, the development of a Tswalu spider database, and mapping the breeding success of raptors in the reserve.

The acclaimed Phinda Private Game Reserve in northern KwaZulu-Natal is a flagship establishment of &Beyond, previously known as Conservation Corporation or CC Africa. Phinda encompasses seven separate ecosystems ranging from woodland, grassland, wetland and forest, to mountain ranges, rivercourses, marshes and pans. The reserve is also home to a contingent of rare black rhino.

Many of Phinda’s rangers and guides are drawn from the surrounding communities and are thus able to share a wealth of cultural information with guests. All are deeply committed to their work. The reserve runs a full-time ranger school, where prospective rangers study for eight weeks before joining a team and gaining more knowledge in the field.

Phinda has embarked on a number of other important conservation and community projects, among them the establishment of a worm farm and organic garden in a nearby community, which will hopefully produce vegetables for purchase by the lodge, a black rhino range expansion project, the ongoing clearing of an invasive alien plant species known as Triffid Weed, an initiative to re-introduce lion into the reserve, and research into leopards in the area.

Spectacular Bushmans Kloof Wilderness Reserve in the Western Cape, situated on the northern side of the Cederberg mountains about 270km north of Cape Town, boasts more than 130 rock art sites, some of which have been dated back to 10 000 years ago.

The reserve was born in 1991 when the McAdam brothers bought seven farms and combined them to form the 75km² Bushmans Kloof. Initially the land was severely over-grazed and neglected, but the McAdams removed the livestock and let the land restore itself.

Today Bushmans Kloof shelters endangered species such as the Cape mountain zebra, the Cape clawless otter and the Clanwilliam yellow fish. Indigenous trees once more cover the land, which lies within the Cape Floral Kingdom, a proclaimed World Heritage site. The reserve has won much international acclaim, first in 2003 when the US-based magazine Travel and Leisure voted it as one of the world’s top 25 ecolodges.

Bushmans Kloof is a leading participant in the 1 600km² Agter-Pakhuis Conservancy project, which encourages farmers to employ ecotourism principles wherever possible. The reserve has also opened a heritage centre where photographs and artefacts, as well as traditional jewellery, musical instruments, hunting kits and more, pay homage to the culture of the Bushmen.