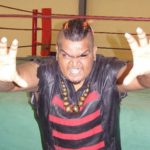 Wrestler and community youth worker Daryl "Nightmare" Naidu features in the next instalment of Brand South Africa's Play Your Part TV series, airing on Sunday 27 July at 9pm on SABC2.

Daryl Naidu stands an imposing two metres tall, but his size belies his calm demeanour as he relates his descent into addiction, and rising anew as a champion of the community, fighting bullying and drug-related problems in his hometown, Chatsworth, in Durban, KwaZulu-Natal.