“They smell very nice. This one is for men. We sell them at R80 a bottle,” Mkhatswa said to Zuma as he looked through perfume samples, which included well-known brands, that local youngsters make at their homes.

“They are made here?” Zuma asked “Made in Muyexe? Give me five of these ones … I am giving you business.”

Mkhatswa, along with several of his friends, are among those who will be in line to benefit from the Comprehensive Rural Development Programme that Zuma launched after his State of the Nation Address in 2009.

The 22-year-old buys samples and chemicals of his favourite perfume brands and combines the samples at his house to produce bottles which he then sells to his neighbours at a reduced price – a business he says he hopes to grow.

His perfumes were among a number of goods on display when Zuma visited the area on Tuesday to check up on the progress made in the village since he launched the programme four years ago.

Speaking to journalists, Zuma said he was “very happy” with the progress that had been made ever since the programme was launched, adding that the project “has taught us several lessons that we will use when we go to other rural areas”.

As part of the programme, about 330 houses have been built, boreholes have been equipped, a water purification plant, underwritten by the Development Bank of Southern Africa, has been set up, internal water reticulation has been established by the Giyani local municipality, and 275 sanitation units have been provided.

This is coupled with a community centre including a post office, clinic, satellite police station, drop-in centre and sports stadium, which has been built by the provincial government.

The local school has been renovated and more classrooms and ablution facilities added. A new Early Childhood Development (ECD) Centre with solar lighting has also been built.

After visiting the ECD centre, which takes care of children who have been orphaned due to poverty, HIV/Aids and domestic violence, Zuma said he was impressed with what the centre was doing for the children.

“I think the key message from the kids is that ever since the launch of the project, they have gone to places. They have been to Cape Town, they can articulate themselves on what they aspire to be in the future,” he said.

“I have also spoken to the Mayor of Greater Giyani Municipality, who said ever since the launch of this project, the scourge of HIV and Aids in the area has dropped. The project has also impacted on the district as well. So I can’t not be happy with this kind of progress.”

Moshe Swartz, deputy director-general in the Department of Rural Development and Land Reform, said the programme would be looking at incorporating the people in the village in cooperatives to help sustain their livelihoods.

While local young people will be trained to pave roads in the area, Mkhatswa will be roped into a cooperative that will manufacture perfumes in the area. Swartz said a laboratory would be built where Mkhatswa and his friends would be able to make their perfumes. 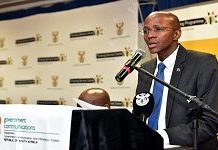