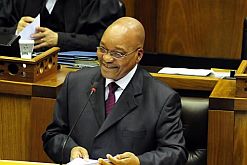 South Africa is planning to pump billions into public infrastructure to stimulate the economy and create more jobs, President Jacob Zuma announced in his State of the Nation address in Parliament on 11 February.

Zuma said government will spend R846-billion (US$110.6-million) over the next three years to improve the energy sector, transport systems and communication networks.

“On transport, we will maintain and expand our road network. We will ensure that our rail network is reliable, competitive and better integrated with our sea ports,” he said.

“Among other things, an established Inter-Ministerial Committee on Energy will look at the participation of independent power producers, and protecting the poor from rising electricity prices,” he said.

But Eskom “will continue to build additional generation capacity and improve the maintenance of its power stations”.

Zuma’s address, which was attended by peace and reconciliation icon Nelson Mandela, focused strongly on measures to grow the country’s economy.

The cost of communication in the country is being reduced as “part of our efforts to encourage greater economic growth”, he said.

“The South African public can look forward to an even further reduction in broadband, cell phone, landline and public phone rates.

“We will work to increase broadband speed and ensure a high standard of internet service, in line with international norms.

“Economic activity is rising in South Africa, and we expect growth,” the president said.

South Africa is recovering from the global economic downturn, which hit the job sector hardest in 2009 with about 900 000 workers being retrenched. “Many of those who lost their jobs were the breadwinners in poor families,” Zuma said.

There are indications that the country is moving away from last year’s trend of widespread job-losses, he said. “The labour statistics … show that the economy is now creating jobs rather than shedding them.”

By the end of 2009 government had created more than 480 000 jobs in the construction, home- and community-based care and environmental sectors, according to Zuma. This means it has reached 97% of its target of 500 000 new jobs in the public sector, which was set in the president’s first State of the Nation address in June last year.

“Now is the time to lay the groundwork for stronger growth going forward, and for growth that gives rise to more jobs,” said Zuma.

The Industrial Policy Action Plan, which government announced in 2009, will lead to more “labour-absorbing” industries, he said, adding that long-term infrastructure development programmes will also most likely create more jobs in the public works sector.

Zuma noted that government needs to work harder on interventions aimed at creating jobs for young people. “Unemployment rates for young people are substantially higher than the average,” he said.

Government is considering a plan to incentivise hiring younger workers in the private and public sectors, thereby encouraging “firms to take on inexperienced staff”.

Young South Africans, some of whom have just matriculated, will also stand to benefit from the expansion of public employment programmes currently on the go.

One such example set up in 2009 is the National Youth Development Agency, which, among other interventions, helps young people access funds to start their own businesses.

“We have directed the agency to work faster to establish its structures, throughout the country, so that it can assist us to mainstream youth development programmes within government,” Zuma said.

“We must also increase the number of youth who enter learnerships in the private and public sectors.”

“We want to improve the ability of our children to read, write and count in the foundation years,” Zuma said. “Unless we do this, we will not improve the quality of education.”

All grade three, six and nine pupils will now write literacy and numeracy tests that are independently moderated. Government hopes this will increase the pass rate for such tests from the current average of between 35% and 40% to at least 60% by 2014.

“We want learners and teachers to be in school, in class, on time, learning and teaching for seven hours a day.”

In addition, all 27 000 South African schools will be assessed by Department of Basic Education officials and findings will be recorded in an auditable, written report.

Government also plans to increase the annual number of matrics who qualify for university admission to 175 000 by 2014.

This year’s State of the Nation address paid tribute to Mandela and all other South Africans who heroically fought for a democratic nation.

The date Zuma delivered his keynote speech, 11 February, marked the 20th anniversary of the release of Mandela and other political prisoners in 1990 – a defining event which changed the course of South African history.

“We have chosen this as the day … to celebrate a watershed moment that changed our country,” said Zuma. “The release of Madiba was brought about by the resolute struggles of the South African people.”

The president also applauded the efforts of various other leaders in the country who had initiated change, including past presidents FW de Klerk and PW Botha, and honoured the role played by the late former African National Congress president, Oliver Tambo “who laid the foundation for this country to become a shining example of freedom and democracy”.

Zuma praised the late Helen Suzman for her unwavering fight against apartheid policies and recognised Inkatha Freedom Party leader Mangosuthu Buthelezi “who also called for Madiba’s release, as well as that of other prisoners and the return of exiles”.