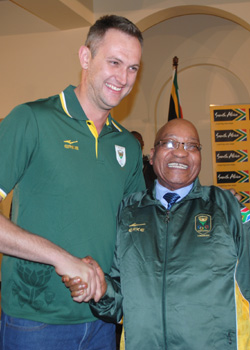 President Jacob Zuma has urged the 125 athletes going to the 2012 Olympic Games in London to bring home at least 12 medals from the multisport showpiece, which starts at the end of July.

The official send-off for the Olympic and Paralympic teams was held at the presidential guesthouse in Pretoria on Thursday 12 July, exactly a week before the first of the two teams to leave, the Olympic team, jets off to London on 19 July.

Team South Africa will participate in 17 of the 38 sporting codes on offer at the Games, which opens on Friday 27 July with a lavish televised ceremony. The event will run until 12 August, and will be followed by a two-week break before the Paralympics commence on 29 August.

The athletes were told by Zuma – who kept the festivities light with jokes – that they will be carrying the hopes of not only the country, but the entire African continent and that the nation will stand behind them.

Because science has proven that humanity originated at our very own Cradle of Humankind, the president joked, South Africans could be considered the “firstborns” of the world.

“Let us show them what we are made of,” he said, to rapturous applause and laughter. “South Africa is a winning nation and I am certain you will win.” 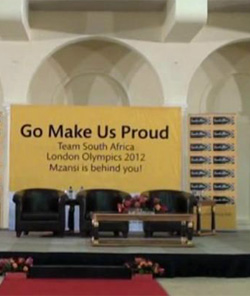 Click to watch video The two teams were represented by about 60 athletes.

The athletes should win medals for former president Nelson Mandela, who turns 94 on 18 July, said Zuma.

He added that the team was expected to do better than Beijing, where a 131-strong team brought home only one medal, a silver awarded to long and triple jump athlete Khotso Mokoena.

“Remember the words discipline, passion, commitment and dedication. These will propel you to greater heights.”

“You must be free, you must enjoy, stretch yourself to the limit but do what you are supposed to do,” Zuma further urged.

Mbalula, whose department had helped organise the dinner, declined a chance to speak on the podium, joking that he had requested the dinner so that the president and the athletes could get acquainted.

“No team leaves the country without the marching orders from the president. He’s the one conveying the message on behalf of the nation,” he said.