South African President Jacob Zuma briefs the media on 22 April after his meeting with representatives of different organisations to discuss xenophobia and migration at the Sefako Makgatho Presidential Guest House in Pretoria.

The gathering opened with a moment of silence for the seven people who lost their lives in the recent attacks on foreign nationals, as well as for the sad passing this week of soccer legend John “Shoes” Moshoeu.

It then reaffirmed that the overwhelming majority of South Africans, including those at the meeting, are not xenophobic. Those present were unanimous in their condemnation and rejection of the attacks.

Zuma outlined concerns raised by some South Africans about foreign nationals, such as crime, unfair business practices, drugs, and an influx of illegal migrants.

He then pointed out that the attacks have damaged South Africa’s global reputation, coming as they did just before South Africa’s hosting of the World Economic Forum on Africa in May and the African Union Summit in June.

“These attacks are not a small matter, nor it is a matter for government alone but for all of us as South Africans,” Zuma said. “We don’t need another occurrence of these attacks in our country.”

While acknowledging that some of the concerns about migration raised by South Africans are genuine and should be taken seriously, those present stressed that there was no justification for the attacks on foreigners.

All stakeholders pledged their support for the initiative by the President to call the meeting and thanked him for the demonstrable leadership he has shown. All sectors committed themselves to be part of the solution.

The meeting which was represented by about 40 organisations, had discussions and made practical suggestions on what, as a collective, stakeholders should do to address the challenges.

The meeting received the following inputs:

The government should convene a colloquium where all stakeholders should have a discussion and find out what are the real causes of these attacks and find solutions.

South Africa must consider a major campaign, including all stakeholders, on a Bill of Responsibilities which is intended to educate young people about what it means to be South African.

A committee formed out of the Inter-Ministerial Committee including all sectors to find solutions to the challenges that have been identified.

The sports fraternity has also committed to use the sporting events they will be hosting to condemn these attacks and call for unity with fellow Africans.

Government should, drawing lessons for the South African National Aids Council, consider forming a similar structure to address challenges of drug abuse in our country.

The South African Youth Council will convene a meeting of the youth sector in Pretoria on 23 April to formulate a youth response to the attacks.

The meeting concluded that it couldn’t guarantee that these attacks will not happen again, unless urgent solutions are found to address genuine concerns that are raised by South Africans.

The meeting further agreed overwhelmingly in conclusion that the attacks must stop and that all South Africans must be part of the solution.

Zuma welcomed the inputs and said they were very helpful and would be used by government in formulating the response of the country as a whole. The President further thanked all the stakeholders for attending the meeting.

The meeting decided to form a committee comprising of representatives of all stakeholders who will work with the Inter-Ministerial Committee to take discussions forward. 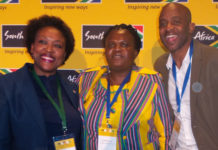