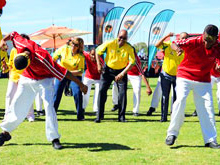 President Jacob Zuma celebrates the 50-day
countdown with a rendition of the Diski Dance.
(Image: The Presidency)

President Jacob Zuma was in Kimberley on 21 April to mark the start of the 50 days’ countdown to the 2010 Fifa World Cup.

Wearing a yellow Bafana Bafana shirt, the president addressed a capacity crowd, encouraging the nation to get behind the home team, and praising the enthusiasm of South Africans in the run-up to the long-awaited football tournament.

His speech follows below:

Representatives from the 2010 Fifa World Cup sponsors, affiliates and partners;

It feels almost like a dream to say that today marks exactly 50 days to go before the kick-off of the spectacular 2010 Fifa World Cup tournament in this country.

That is the moment which we are all waiting for, our maiden showcase for the African continent with the tournament of this magnitude. We have spoken about the year 2010 for so many years in this country that it became synonymous with football and celebrations. But somehow it just seemed to be taking too long to come, until now!

The celebration of 50 days before kick off today is a culmination of the efforts of more than a decade of hard work and dedication. We thank the organisers and all stakeholders for their tenacity and distinct character in bringing this tournament here and preparing so meticulously for it.

We also thank the people of South Africa for all the initiatives which they are mounting even today, towards the success of this tournament and beyond.

Included among these tourism ambassador programme, of about 15 000 volunteers who will be placed across the host cities during the tournament, as well as a wide range of efforts from various sectors.

South Africans embraced the World Cup tournament many years ago. They literally cried when we failed to win the rights to host the tournament first time round, and have been on a roll ever since, preparing for this excitement of a lifetime.

What is happening in the country at the moment is quite a marvel to watch. The nation is seized with exhilaration and great anticipation. The flags and the colours of the country are in display all over, in the cars, in our houses, and in the attire. Football Fridays have been so popularised that most wish they were a daily indulgence.

Taxi ranks, cafes, streets and literally every corner of the country becomes bright yellow on Fridays, a nation crazy about football and determined to make this tournament succeed beyond expectations. It is heartening to see how the entire nation is united in support of our national team. This harmony should define us and resonate in a wide range of spheres even outside sports.

Nowhere else has this exhilaration been so expressly demonstrated and overwhelming than last week at the ticket sales outlets countrywide, where people spent a night queuing for tickets.

On this note, we pay tribute to our compatriot who unfortunately lost his life while still on queue to buy a ticket. We extend our condolences to the family and relatives; we are truly saddened by this tragic incident. His patriotism and love for his country must be repaid by the support that South Africans will give to this tournament to the end.

We are also enthused by the contribution of the private sector in this tournament, particularly with their motley array of Proudly South African products, including in arts and culture activities, as well as crafts. They have also contributed in ways that might be too numerous to mention, but all of those have played a crucial role towards the success that we are celebrating today as a nation.

With an estimated turnout of thousands of members of media, this country is sure to receive the publicity that it has never received before. The story of this country is going to be narrated and retold in many languages to all parts of this world.

We are here today in Kimberley as part of team South Africa to mobilise our people behind this tournament and to communicate our readiness to host the event. Kimberley occupies a special place in the history and heritage of this country.

This is the place where the world descended in the 19th century on what was popularly known as the big diamond rush. It is the place which heralded massive change in the economic landscape of our country and it has all kinds of relics to bear witness to this. This is why it is a famous tourist site and we believe that the Uruguay side was under no illusions when they chose this place as their base camp.

It was at this stadium, in January 2009, where government, the Organising Committee in partnership with the South African Football Association and the German Technical Cooperation (GTZ) launched the 2010 Mass Mobilisation Roadshow which focused on youth development in sports and to create awareness on this tournament. I am hopeful that one day this city and province will have a football team in the Premier division.

On this note, I therefore wish to commend the non-host cities for all the efforts that they have contributed towards the tournament. Most of them have provided base camps for the teams, preparing both accommodation and training facilities.

In these seemingly limited ways, they will be able to showcase our ability even outside the scope of host cities. Each and every town in this country bears ineffaceable imprints of the history of this country, and has its own variety to offer. So it does not begin and end in host cities.

We must remember that there is easy communication across the country. People will be visiting places far away from the host cities in between the games. Therefore I also thank the people of Kimberley and the Northern Cape in general for supporting this tournament.

This country has made all the preparations for the tournament and it is ready for it. Our host stadiums have been completed and match-tested. Any work that is still being done is just finishing touches on the precincts. We have made massive infrastructure upgrades and as it was indicated at the beginning of this year in Parliament, these projects will also continue beyond 2010.

Our airports are ready; just yesterday we were opening the expanded OR Tambo International Airport and other airfields in various towns have been upgraded.

Our much touted Gautrain will be able to ferry the people with ease from Sandton to the OR Airport. Plans have also been made to take care of any eventuality arising from power supply. Backup generators have been arranged. We will also be treating the world to first class fibre broadcast information technology, thanks to Telkom and Sentech.

Security has also been adequately addressed. Provinces have developed detailed security plans, which have been synchronised to the national plan.

Additional funds of more than a billion rand have been allocated for safety and security matters. These include additional service personnel, helicopters and all the required resources. Our security departments are co-operating with international law enforcement agencies to eliminate all threats to the event. So there is nothing that has been left to chance and no alarms should be raised about this.

Another additional issue is that there are plans to establish special courts for this tournament so as to deal with the offences promptly. Emergency measures and disaster management plans have been completed in the host cities. Sufficient funds have been allocated for this purpose.

Environmental plans to relieve stress on our natural resources are also in place, and a host of beautification, green goal and waste management projects are in place.

We will also ensure smooth entry and departure from various ports of entry and measures to that effect will be announced. The opening and closing ceremonies have been planned and rehearsals are underway.

Considerable spin-offs have been reaped from the preparations towards the tournament. About 66 813 direct jobs were created but the number is significantly higher when we consider indirect labour impact.

Close to R9-billion (US$1.2-billion) has been accrued to households, including those in the low income bracket. This tournament will contribute R4.9-billion ($616-million) to real GDP this year 2010, with the impact on the wide range of industries.

It is in industries such as tourism where consumption is expected to be at its pinnacle. The Department of Trade and Industry is assisting small, medium and micro enterprises (SMME) sector to exploit event related business opportunities, such as crafts, hospitality, food, beverages and many others.

The capital investment has also been so massive and will also be the lasting legacy which will improve our competitive edge in other tournaments. With the 846 billion rand infrastructure programme rolling out, the government is set to continue with this expansion even way beyond 2010.

Therefore there is no gainsaying the fact that this tournament has made a massive impact in our economy already, and that its legacy will be equally impregnable.

Now is the time for all of us to own this event, to make it our responsibility, as individuals and as a collective, to create necessary conditions for the success of this event.

This is the single greatest opportunity we have ever had to showcase our diversity and potential to the world. We must rise and tell the story of a continent which is alive with possibilities and resilient people who embrace people from other nations and cultures.

As we mark 50 days to the start of the 2010 Fifa World Cup, even if we may still have one or two things outstanding here and there, the bottom line is that it is here, and we can feel it.

Let us celebrate this moment, and be good hosts.

I know that we have what it takes to do so!