South Africa has made enormous strides in youth development over the past two decades, according to Jeff Radebe, the minister in The Presidency for performance monitoring and evaluation.

“That is why over the past 20 years of freedom and democracy in South Africa we gave education the highest budget allocation, more than any other departmental budget vote,” he said.

“Government bursaries for higher education have been increased from R21-million in 1994 to R8-billion in 2013, offered through the National Students Financial Aid Scheme [NSFAS].”

Radebe called on the youth to help bring about radical economic transformation by taking a step to participate in personal economic development. “The youth must be found in farming, in ICT, in the financial institutions, in the media, in engineering, in sports, in cultural activities and all other activities that constitute the economy of our country.”

By the end of 2014, the government had spent over R730-million to support over 15 000 youth enterprises. “I am confident that the establishment of the Small Business Development Department will further consolidate expansion of youth entrepreneurship,” Radebe said.

The Gauteng cabinet had made several decisions, he said: that the top three matriculants in each school would receive a bursary to study at a higher education institution for four years; that every pupil in Grade 11 would be required to get a driving licence as a skill; and that from 2016, students who dropped out of university because of financial difficulties or because they were pregnant would get bursaries to further their education at an institution for higher education as part of the Second Chance programme.

This year marks 39 years since the 16 June 1976 uprisings, commemorated each year in June which has been designated Youth Month. Youth Day, an annual public holiday is on 16 June. This year, the theme is “Youth moving South Africa forward”.

Also speaking at the launch, the executive chairman of the National Youth Development Agency (NYDA) said the fund had spent R29-million on micro and small youth-owned enterprises through its Business Grant Programme, in 2014.

To date, the agency’s Solomon Mahlangu Scholarship Fund had provided 586 young people with scholarships to the value of R40-million. It was launched in March 2014.

“Today we can speak of an NYDA that has proudly supported 938 044 young South Africans with career guidance interventions and 1 253 049 young people with valuable information to access the plethora of opportunities provided to youth by the government,” Pillay said. 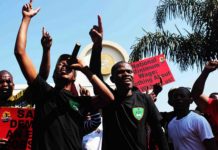