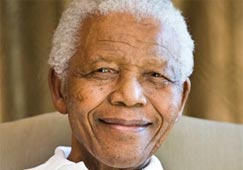 ‘It is in your hands to make of our world a better
one for all’ – Nelson Mandela (Photo: Mandela Day)

The world will be buzzing this Saturday: it’s the birthday of the world’s favourite person – Nelson Mandela turns 91 on 18 July.

The great man, looking frail and white-haired these days, has watched and grieved at the deaths of his closest comrades, Oliver Tambo and Walter Sisulu, but still he survives. And he still lives in Houghton with his wife, Graca Machel.

Many would agree that besides his humanity and humility, one of his greatest assets is something very simple – his inimitable smile. Madiba is a global citizen, with the freedom of over 50 cities, including Johannesburg, in addition to dozens of awards and honours.

While the world celebrates his birthday on Saturday, he will spend the day quietly at home with his family.

National celebrations will take place in Mary Fitzgerald Square, in Newtown, under the theme “Working together for the common good of our nation”. There’ll be a programme of speeches, music and dance, starting at 9am.

There has been a call, spearheaded by the Nelson Mandela Foundation and the 46664 Campaign, to make 18 July Mandela Day, to forever celebrate the sacrifices he made for peace and reconciliation in South Africa.

“We are humbled by the call for an annual Mandela Day in our honour,” reads a statement issued on Mandela’s behalf. “Our struggle for freedom and justice was a collective effort. Mandela Day is no different.

“Mandela Day will not be a holiday, but a day devoted to service. It is our hope that people will dedicate their time and effort to improve the conditions within their own communities.”

Mandela Day would involve taking 67 minutes in the day to do something for the good of humanity and the planet, in recognition of the 67 years Mandela devoted to liberating South Africa.

“A prisoner for 27 years, an activist for 67 years, an inspiration for 91 years,” records a video clip on the website.

The call is supported by President Jacob Zuma, who, in his first state of the nation address, asked South Africans to highlight Mandela’s legacy. “Let us wholeheartedly support Mandela Day and encourage the world to join us in this wonderful campaign.

“Mandela Day will be a celebration of Mandela’s life, values and principles and a global call to action for people to recognise their individual power to make an imprint and change the world around them,” he added.

Members of Parliament will participate in Mandela Day by campaigning within their communities through constituency work-based programmes in recognition of Madiba’s 67 years of sacrifice.

The Mandela Day website has a page where people from all continents have indicated what they will be doing for 67 minutes on the day. You can leave your Mandela Day imprint on the page.

The University of Fort Hare in Eastern Cape, together with the Nelson Mandela Institute for Education and Rural Development, is conducting a week of celebrations, culminating on Saturday with painting and beautifying Jabavu High School in Alice in Eastern Province, as well as cleaning the town.

The Nelson Mandela Foundation’s Dialogue Programme will convene a community dialogue on xenophobia in Khayelitsha, outside Cape Town. Foundation staff will visit three children’s homes in Tshwane to deliver books and to talk about Madiba’s life and legacy.
World support

“Mandela Day is an important opportunity to honour Nelson Mandela and to honour his historic and memorable achievements … it is a day dedicated to the idea that every individual has the power to change the world for the better … so as we celebrate the first Mandela Day, let us build a legacy worthy of bearing his name,” said Brown.

Last week, Nobel Laureate Professor Muhammad Yunus gave this year’s Nelson Mandela Annual Lecture. He is the founder and managing director of Grameen Bank, a micro-finance bank that loans money to the very poor; it has a re-payment rate of 99,6 percent.

Yunus wholeheartedly supports the Mandela Day concept. “The world is so lucky to have a person like Nelson Mandela. To celebrate his birthday in the form of Mandela Day is so appropriate, but it must become part of human heritage, rather than a one-off celebration.”

On Wednesday, 15 July, former US president Bill Clinton will host a Mandela Day gala dinner and auction at the Vanderbilt Hall in Grand Central Terminal, in New York City. Machel will join the festivities, together with Mandela’s daughter and grandson.

Guests at the gala will include Brown, who will make a video address, and French President Nicolas Sarkozy and his wife.

46664, a global events company raising money for HIV/Aids projects under the umbrella of the Nelson Mandela Foundation, has supporters like actors Forest Whitaker, Matt Damon and Morgan Freeman, who will pay a special tribute to the great man. Actress Whoopie Goldberg will appear along with other invited guests, as well as a number of elite NBA superstars. Performers Aretha Franklin, Stevie Wonder and Alicia Keys will join the glittering line-up.

Other performers will include Jonathan Butler, the Soweto Gospel Choir, Keisha Whitaker, Harry Belafonte, Beyoncé and Jay Z. The concert will be streamed live on Mandela Day TV.

The dinner will culminate in an exclusive Christie’s auction. Funds raised on the night will help to promote Madiba’s legacy through the Nelson Mandela Foundation and 46664 HIV/Aids projects and outreach campaigns in sub-Saharan Africa.

An interactive installation to honour Mandela’s legacy opened this week at the Vanderbilt Hall. Six words – listen, learn, unite, act, speak, lead – representing Mandela’s struggle against social injustice, are in 3D and are illuminated in the display.

“The back of each word has detailed information about his life, stories and speeches: ‘listen’ contains messages relating to his most powerful speeches; ‘learn’ presents his biography with iconic images; ‘unite’ recalls inspiring stories in which Mr Mandela showed the importance of reconciliation; ‘act’ explains the work of the different foundations that Nelson Mandela founded; ‘speak’ challenges visitors to consider how they might speak up against injustice; and ‘lead’ is a display that allows visitors to write their pledge to help at a local cause of their choice,” says the 46664 website.

“The installation serves as a testimony and a salute to the life of Madiba and is part of a global effort to help people realise their individual power to change the world around them for the better.”

Two songwriters, Jack Johnson and Ben Harper, have donated their song, Two Hands, to Mandela Day. The video can be seen on www.46664.com.

Nelson Mandela’s birthday has become much more than a celebration of his birth, it’s become a day of service. Known as Mandela Day, 18 July is a day when ordinary people can do something to make a difference to the world around them.

People are being encouraged to spend 67 minutes of their day to community service.

Brand South Africa will be joining Heartlines to host a picnic at The Wilds for 120 orphans and vulnerable children from Hillbrow. There will games, jumping castles, face painting and – a must for every birthday party – a large cake with 91 candles.

The picnic, from 10am to lunchtime, will also see the organisers plant a tree, showing the youngsters the importance of caring for the environment.

Mandela Day is an initiative of the Nelson Mandela Foundation, endorsed by President Jacob Zuma in his State of the Nation address to Parliament, to celebrate the sacrifices Madiba made in the struggle for reconciliation in the country.

The 67 minutes recognises the number of years Mandela devoted to the struggle for liberation.