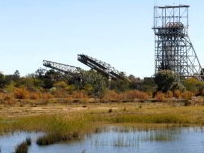 The rest of the continent is catching up with South Africa’s established mining sector.
(Image: MediaClubSouthAfrica.com. For more free photos, visit the image library)

Africa’s economy is on track and could make a speedier recovery from the recession than the US. This is according to the World Bank’s Global Economic Prospects report for 2011.

The report, released in mid-January, projected that sub-Saharan Africa would increase its gross domestic product (GDP) from 4.7% in 2010 to 5.3% for this year. That figure would be bumped up to 5.5% in 2012.

The report specifically stated that prices in metals, minerals and oil, as well as greater investment in manufacturing and telecommunications companies, have contributed to the growth.

According to Phumelele Mbiyo, Standard Bank’s Senior Africa Strategist for Global Market Research, the figures indicate that economic activity, especially in terms of mining and construction, is expanding in the region.

“The reason for such an increase is because prices for commodities are pretty high and they have attracted investment, especially from emerging markets such as China,” he said.

Mbiyo believes the average person would benefit from these positive projections, as companies are looking to employ locals.

“There is already employment of locals in the mining and construction industries. There is going to be a lot of employment in future, especially by European and American based companies who have invested heavily in mining in Africa.”

However, the report indicated that the best growth rates were not to come out of South Africa, the region’s traditional economic hub. Instead, the highest figures came from countries such as Nigeria, Angola, Kenya, the Republic of Congo, Ethiopia, Mozambique, Botswana, Zambia, Malawi, and Tanzania.

South Africa was projected at 3.5% for 2011 whereas other countries in the rest of the region were said to grow at an average of 6.4% for the same year.

Mbiyo explained that this is not because South Africa’s growth is slowing, but rather because the other countries are starting new industries now and from a low base whereas South Africa had already established the same industries years ago.

“Angola is set to grow by 7% on average whereas Ghana will average 13% in the next two years. It is because the latter is starting to produce oil,” said Mbiyo.

He added that Africa should now focus on sustaining growth as the continent still lags behind other major developing and developed economies.