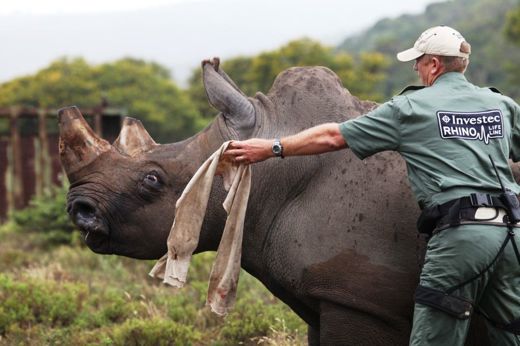 Dr Will Fowlds doing what he does best. Photo: williamfowldsdaytoday.blogspot.com

South African wildlife vet Will Fowlds is in Hanoi today to lead a rhino workshop hosted by the Vietnamese government.

South African, American and Malaysian ambassadors, Vietnamese government officials, a delegation from Vietnam CITES as well as journalists are expected to attend the information-sharing event in Hanoi.

“Hopefully this will pave the way for some serious action to reduce demand. My message, the reality of rhino poaching for the rhinos that are being slaughtered by the hundreds. I am praying we hit a nerve,” Dr Fowlds said on his Facebook page this week.

He describes South East Asia as the “root of the rhino crisis”. Rhinos are poached for their horns which, according to some South East Asian countries, have healing capabilities and other medicinal uses and values. Science – and common sense – show that’s certainly not the case. It is hoped that education and raising awareness will help curb rhino poaching and the illegal rhino horn trade.

“Rhinos are a tangible link to our pre-historic past, a reminder of an era of species long extinct, which makes them survivors in their own right. Man has already demonstrated how easily we can decimate animals like these but, significantly, South Africa has shown what is possible through active conservation: We can bring species back from the brink of extinction.”

South Africa, Dr Fowlds says, is currently losing an average of two rhino every three days. “This crisis is now the most significant conservation issue this country has faced … South Africa is now custodian to most of the world’s remaining rhino. We are the rhino’s last stand.”

Dr Fowlds is a deeply passionate – and compassionate – wildlife vet. Based in the Eastern Cape, he has had first-hand experience in dealing with poached rhinos.

In 2012, he documented a poaching attack on three rhinos at the Kariega Game Reserve in the Eastern Cape. Two died, but Thandi, the surviving rhino, has proved to be a real fighter and Dr Fowlds has been dedicated to her rehabilitation.

Dr Fowlds has also partnered with Investec in the Investec Rhino Lifeline. This aims to raise awareness of the rhino crisis and to respond through education, rescue and prevention initiatives.

Thandi, the Kariega rhino, recently received a skin graft in a pioneering operation. You can follow Thandi’s progress on Kariega’s website.