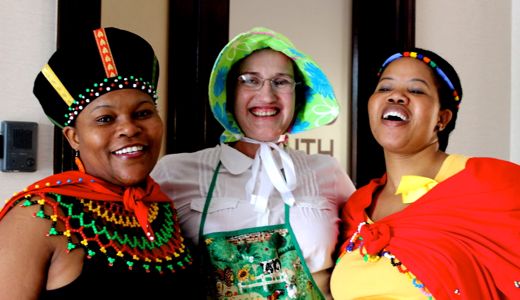 Celebrating the freedom to be who we are. That’s what Freedom Fridays are all about.

South Africa will celebrate 20 years of democracy on 27 April 2014. And it’s time to show off how proud we are to be South African. Clothes in the colour of the national flag, a rugby or football jersey, a South African scarf, traditional wear, beads and shweshwe – wear anything that shows your unity in celebrating this important landmark in our country’s history.

“Let us never be unmindful of the terrible past from which we come, that memory not as a means to keep us shackled to the past in a negative manner, but rather as a joyous reminder of how far we have come and how much we have achieved.” – Nelson Mandela, quoted by BrandSA chief executive Miller Matola at the launch of Freedom Fridays

South Africans are being encouraged to wear anything that expresses their pride in being South African every Friday until the celebrations next year. So go ahead, and wear your heart on your sleeve.

An initiative of LeadSA, it is supported by Brand South Africa, the Department of Arts and Culture, the Government Government Communication and Information System (GCIS) and Proudly SA.