South Africa has risen two places, to 47th, in the 2016 World Economic Forum Global Competitive Index, improving its ranking in 10 of the 12 pillars measured. The country has the most competitive economy on the African continent.

The newly released World Economic Forum Global Competitive Index ranks South Africa as the 47th most completive economy of the 138 studied. The improvement in the rankings, the best in five years, comes as the country has improved both the competitiveness of our markets and relationships between labour and business, made modest, but important, progress in the quality of education, which is up five places from 2015.

One reason for South Africa’s rise in the annual appraisal of prosperity and productivity is, according to the report, our ability to withstand the fall in price of commodities. Unlike African neighbours and other developing economies, South Africa has also built on the strength of its financial sector, which shielded the country from the worst effects of the global economic crisis.South Africa is ranked first out of 138 countries for auditing standards, the protection of minority investors and ability to finance through equity markets. The country is second or third for soundness of banks and financial services, efficacy of boards and regulation of the stock exchange. 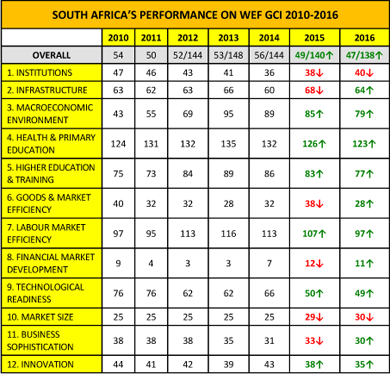 Robert Crotti, a WEF economist, explained to the Biznews website: “What we noticed is that to make a country really competitive, you need to have all the pieces in place. To rank number one in one specific dimension without having the other factors also well-placed, doesn’t really bring the country to grow and reach the prosperity where we see. In fact, when we look at the top countries in ranking, they tend to rank quite high on all the dimensions.”

The report highlighted the biggest future challenges for our economy. “Infrastructure development has stalled, both in transport and electricity, with power shortages experienced this year. Institutional quality has diminished, with increased political uncertainty, less transparency, some security concerns, and business leaders having less trust in politicians (down 11 places since last year).”Crotti said the GCI is not meant as a criticism of each economy studied. For WEF it is a way to benchmark progress. “Therefore, we hope that it can be used as a platform for all the actors in the economy in looking at how and what worked, to then take the next steps to improve their economy.”

South Africa’s growth forecast for 2016 is now set at 0.1%. Outside factors, slowdown of the Chinese economy and the volatility of the rand have dampened the potential for stronger growth. Where developed economies are accepting a “new normal” of lower economic growth, lower productivity growth, and high unemployment, South Africa and other developing economies have an opportunity to grow by improving productivity.Despite China’s slowdown it is the best-placed Brics nation, at 28, followed by India, Russia and South Africa. Brazil lags behind its Brics peers at 81. As Crotti explained, “India is really the bright spark in the area of competitiveness improvements and this is done mainly on the back of reforms, especially in terms of investment and market efficiency.”

That’s really important to be able to jump-start the economy and as we’ve seen, also be able to gain innovation,” Crotti said. “To learn much more about technology and innovation. At the dawn of this Fourth Industrial Revolution it is really going to be key going forward.”