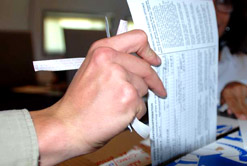 Registered expatriates intending on voting have
15 days to notify their local electoral office of
their intention to cast their ballot.

Twenty-five years ago, the crowds that gathered in Trafalgar Square to protest and demonstrate against apartheid South Africa played a major role in galvanising international opinion against apartheid and hastening its downfall.

This time, South Africans gathered in their thousands in orderly queues to have their say in the future of the democratic South Africa in the same place that the demonstrators once stood.

With 7427 South African voters marking their crosses in 12 hours the South African High Commision was not only the largest voting station abroad but was also nearly twice the size of the largest one in South Africa – Joubert Park in Johannesburg with between 3000 to 4000 voters, according to the Independent Electoral Commission (IEC).

I have never seen such a large group of South Africans behaving in such a subdued manner.
Perhaps it had something to do with being in the historic Trafalgar Square on an initially overcast –and later fine – London spring day.

Perhaps it had something to do with the the tiny figure of Lord Nelson on his towering column peering out over Parliament Square where an animated statue of our own Nelson Mandela is flanked by the likes of Winston Churchill, Margaret Thatcher and General Jan Smuts, the only other South African in the Square.
Perhaps, it had to do with the fact that it was very early in the morning.

But I suspect it had more to do with the reverence of voting – the universal way for ordinary citizens to have a say in their country and the future.

They queued ten-deep across Trafalgar Square and the length of the facade of the iconic South Africa House.
It was a day on which South Africans filed onto South African soil in unprecedented numbers thanks to a decision by the Constitutional Court – the cornerstone of South Africa’s democracy – which required government to extend voting facilities to all South Africans abroad who are on the voters roll.

They waited quietly, patiently, reading the latest copy of The South African, chatting quietly about why they were in the UK, why they were voting, exchanging their memories, hopes and fears for their country.

Back then it was both a deeply moving and empowering experience.

And so it was again yesterday.

This time, the voters were mainly young, mainly white and all were united by the decision to have a say in their country and in choosing the next government.

It also took me back to the mid-1980’s when I served as a correspondent for the South African morning group of newspapers – including the Rand Daily Mail and the Cape Times – when I covered almost constant demonstrations and protests by South African exiles and large numbers of committed members of the British public who played such a crucial role in ending apartheid.

Seldom in the history of freedom struggles has there been such a display of international solidarity by a nation as was the case with the British public’s involvement in the Anti-Apartheid Movement.

Today photographic records of those protests are displayed on the walls of South African House and many famous faces are still recognisable – Thabo Mbeki, the late Harold Wilson, the late Archbishop Trevor Huddleston, Abdul Minty, Peter Hain, the late Mike Terry and many more.

As I stood waiting and chatting to fellow South Africans, I was humbled to reflect that we would not be standing there voting in a democratic election in South Africa had it not been for the suffering and sacrifice of thousands of South Africans in resisting apartheid for all those years .

Many gave their lives, many sacrificed family members and friends.

I was overcome by a deep humility tinged with pride.