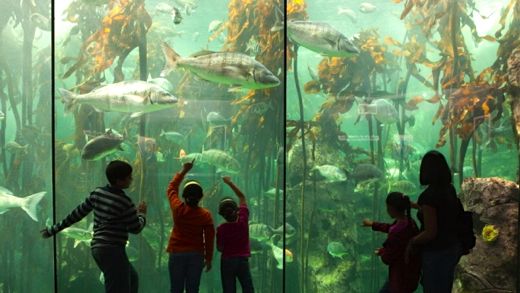 The cold and wet weather has finally settled over the peninsula, and Capetonians have bedded down for their annual hibernation. In summer, the days are gloriously long, and families eat dinner after eight, children stay up til after nine – because the sun hasn’t set yet.

But come winter, with its short, wet and cold days, and the town catches up on its zzzz’s. Dinner by 6.30pm, in bed before eight, and the drive to school in the morning is in the dark. Seaside towns are always dreary in the rain.

But for those few hours of daylight, finding fun when it is pouring outside heads the list of important things to do in my family. Top draw is the Two Oceans Aquarium at the V&A Waterfront – and it never gets tired.

First stop has always got to be the giant spider crabs, where we spend ages trying to spy the faces of the samurai warriors on their bellies.

Legend tells of a great Japanese sea battle, in which a young emperor, seeing that his army was defeated, threw himself into the water with his samurai warriors. The emperor and his soldiers turned into crabs and have been wandering the floor of the ocean ever since.

Spider crabs are the largest crustaceans in the world; males grow to about 1m in length with a 4m leg stretch. They live about 400m under water that is pretty cool – between 11°C and 14°C. Very little is known about giant spider crabs. It is virtually impossible to determine their age and we do not know when they reach sexual maturity. They have to moult when they grow, shuffling off their old exo-skeletons. This is a complicated and potentially life-threatening process which can take up to two days. A crab can become entrapped in its old shell and die, but even if the moult is successful, the sheer effort is sometimes so exhausting, that the crab dies soon afterwards.

Other favourite stops are the touch and feel tidal pools and the microscope displays. But really, the highlight every time is the penguins – they are irresistible, waddling around in their tuxedos. Check when you arrive to make sure you get there for feeding time. You’ll be glad you did.

And if you’re game, you can even go scuba diving with the ragged tooth sharks – without a cage.

After strolling around the aquarium, we highly recommend the short trip to the V&A Market on the Wharf. There’s a whole world of food on offer, from Hungarian street food to fried chicken, vegetarian curries to cakes and muffins, really good coffee to freshly juiced fruit and veggie drinks. It’s open every day except Christmas and New Year’s, meaning you can always get something delicious to eat.

Outside the market – for that gap in the rain when fresh air is needed – is Nobel Square. Four larger-than-life bronzed statues stand in a row, all of them South African Nobel Peace Prize laureates: Albert Luthuli, Desmond Tutu, FW de Klerk and Nelson Mandela. Home happy and tired; job done.