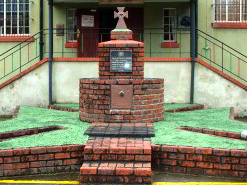 South Africa is a country not only built on gold and diamonds, but on the blood of many who strove to claim the land as theirs.

Sadly, many relics from these battles are lost. However, there are a few people who have made it their purpose to preserve the precious artifacts that survived, and make them accessible to the public.

One such place is the Buffalo Volunteer Rifles (BVR) Military Museum in East London. The museum is the city’s hidden gem; unknown to many yet containing a treasure trove of history.

According to curator Major Anthony Step, the museum serves as a depository of war history that is preserved for future generations.

“We house military memorabilia pertaining to those who served in all branches in all wars,” he said.

For Step, the museum, located at BVR headquarters on Fleet Street, is a true representative of internal conflict in the country. It contains items from as far back as the Cape Frontier Wars, which started in the 18th century, to the liberation struggle of the latter 1900s.

The museum is divided into four themes – the armed struggle, military artifacts, BVR regimental memorabilia and a depository of the commander units which were closed down in 2006.

The museum houses old artillery, medals, guns, uniforms and photographs. However, Step did acknowledge that not everything could be salvaged.

“This is the sad thing about conflict. Some things get lost and stolen – that is why it is important to have a museum,” he said.

The East London Museum is currently assisting the BVR centre with items related to the armed struggle during apartheid. Though the headquarters are running out of space to house all these goods, Step said there is another base they would utilise in the future.

One of Step’s prized items is a document containing the minutes of BVR meetings in 1876, its first year of existence. He also treasures the kilted uniform of the BVR’s Scottish Highland Company.

Any visitor, though, would be startled at a well preserved letter sent to a Nazi officer, congratulating him on his efforts. It was signed by Adolf Hitler.

Step has had to search for artifacts throughout the Eastern Cape to fill the museum.

One such item is the cannon that greets visitors at the entrance to the headquarters. It was used by the British during the Napoleonic War before being brought to South Africa for the British campaign in 1834. The cannon was later found standing outside the Civic Centre in the small town of Keiskammahoek in the Eastern Cape province.

The museum also has the two cannons that were previously displayed outside the East London City Hall. The BVR took them before they could be discarded by city officials. However, they are disintegrating slowly.

“They need immediate restoration or they will be lost to rust and corrosion. The regiment does not have the funds to do so,” said Step.

It is not only the items themselves that inspire awe, but also the astounding knowledge that Step displays when he shows visitors around the room. He is a consummate storyteller, providing tidbits of information on almost every item in the complex.

Step believes the value of an item is measured by the tales it can tell. “Every piece in a museum must tell a story,” he said.

Looking at a battlefield illustration, drawn during the Anglo-Boer War, he chuckled while pointing out that at the very same spot a soldier, who was sitting passively, was shot in the head. Before he collapsed, the soldier cried, “Who threw that stone at me?”

About the Buffalo Volunteer Rifles

•    An infantry regiment of the South African army, the Buffalo Volunteer Rifles is in its 135th year of existence. It was established as the Buffalo Mounted Rifles in 1876 by Edward Yord Brabant.

•    The regiment changed its name four times. In 1879 it was known as the Cape Mounted Yeomanry before changing to the Kaffrarian Rifles in the 1890s. It became known as the Buffalo Volunteer Rifles in 1999.

•    One of the more controversial figures was Rowland Bettington, who commanded the regiment in the 1890s and gained notoriety when he partook in the Jameson Raid.

•    In 1927 the BVR officially affiliated itself with the King’s Royal Rifle Corps.

•    The BVR boasts a Victorian Cross hero in Gerrard Ross “Toys” Norton. He received the accolade after his efforts in the Second World War. He is only one of three South Africans to have received the medal, which is displayed at the BVR Museum alongside a photo of the war veteran.

•    Among the BVR’s latest members are former soldiers of the liberation struggle who fought against the apartheid regime.