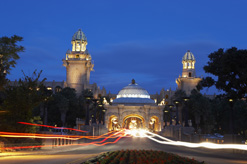 The entrance to the Lost City at the Sun
City entertainment complex in North West
province. The complex is the region’s
biggest tourist drawcard.
(Image: Hannelie Coetzee,
MediaClubSouthAfrica.com. For more
photos, visit the image library.)

Growing at three times the world average, tourism has become one of the most important sectors in South Africa following the end of apartheid, creating almost a million jobs and even overtaking gold exports as an earner of foreign currency.

Figures released for the first three quarters in 2010 reveal that in the nine months to end of September, South Africa welcomed almost 6-million arrivals, an average increase of 17.1% over the same period in 2009. The second quarter recorded a major 91.3% increase in visitors from the Americas, compared to the same period the year before. This was attributed to South Africa’s hosting of the 2010 Fifa World Cup in June and July.

In 2009, South Africa experienced a 5.7% increase in arrivals from African land markets, while revenue generated by foreign arrivals increased by 7.0%.

A key driver of this growth has been the liberalisation of South African airspace, which has seen an increasing number of international airlines carrying out more weekly flights between South Africa and other countries.

The move to liberalise local airspace was approved by the government in 2006, in an attempt to increase competition in the aviation industry and improve affordability of air travel.

There has been an increase in flights between major South African cities like Johannesburg and Cape Town and countries in Europe and the Middle East, while foreign carriers from the US and China have started services between the two respective countries.

South Africa is also increasingly targeting business tourists: even though they only make up five percent of foreign arrivals to the country, they on average spend up to three times more than tourists arriving on leisure purposes.

According to the Department of Environmental Affairs and Tourism, 40% of business visitors returned to the country within give years of their first visit, while 18% went on leisure trips prior to their business activities and 22% did the same afterwards.

Statistics from the Southern African Association for the Conference Industry show that South Africa is ranked 32nd globally for business tourism, with 1.3% of the market, a figure which the body expects to increase to 2% over the next few years.

The tourism department currently runs a programme called Sho’t Left, which encourages South Africans to travel more within their own country by providing them with information about tourist attractions as well as access to tour operators providing reasonable-priced tour packages.

As expected, hosting the 2010 Fifa World Cup sparked a South African tourism boom, with private business also geared up in anticipation of the hordes of followers attracted to the event.

As early as the Tourism Indaba held in Durban in June 2006, South Africa’s First National Bank noted that most of the country’s luxury hotels were already experiencing unprecedented occupancy levels, driven mainly by holidaymakers in Cape Town and business travellers in Johannesburg.

Hosting the Fifa Confederations Cup and the British and Irish Lions rugby tour in 2009, as well as the Indian Premier League’s 2009 tournament and soon after, the Champions Trophy of the International Cricket Council, further increased the media coverage of the country across the globe, while also attracting thousands of fans.

For the first time in the event’s history, Fifa gave accreditation to not only South Africa’s top-notch hotels, but also to selected game lodges, guesthouses and bed and breakfast establishments that obtained necessary star grading rating from Tourism Grading Council of SA.

This move helped South Africa achieve the dual objectives of spreading tourism benefits beyond cities where matches were taking place and providing spectators with a wider range of accommodation options.

In addition, South Africa, Zimbabwe, Zambia and Mozambique signed an agreement to share the tourism spin-offs of the World Cup through “border-free” tourism packages.

South Africa’s provincial Limpopo Tourism Parks Board, the Zambia National Tourist Board, Zimbabwe Tourism Authority and Mozambique struck the deal creating the Limpopo-Zambezi Destination following the Tourism Indaba conference held in Durban. The agreement saw the creation of new package tours between and within the four countries, the easing of border formalities to smooth the passage of travellers through border posts, and joint marketing and branding in support of the package tours.

The National Treasury later allocated R574.9-million to South African National Parks (SANParks) to develop infrastructure and improve facilities at the country’s nature reserves ahead of the World Cup.

This complemented the R600-million that was spent on the infrastructure component of the Expanded Public Works Programme, which was used for general upgrades, as well as for new rest camps, tourism roads, fences and other related infrastructure,

In addition, South Africa’s National Energy Efficiency Agency committed a further R500-million to SANParks, which was used to make facilities within the country’s national marks more energy-efficient and environmentally friendly ahead of 2010.

The tourism boom has had a positive knock-on effect on the country’s hotels. Leisure travel remained the key earner across the various travel sectors, with sports tourism also performing well.

The sector, being fairly labour-intensive and having lesser entry barriers, has been identified as one that is vital to ensure the country achieves its goals set out in the Accelerated and Shared Growth Initiative for South Africa (Asgi-SA), which aims to halve unemployment and poverty in the country by 2014.

The government aims to increase the tourism sector’s contribution to 12% of GDP, which has the potential to create a further 400 000 jobs.

While tourism has continued to outperform all other sectors of the economy, former Deputy President Phumzile Mlambo-Ngcuka – who heads Asgi-SA – has stated that the sector is far from saturated.

She said challenges facing the tourism industry included increasing volumes of both local and foreign tourists, increasing tourist spend and improving the geographic spread within the country beyond the three provinces that attract the most tourists – KwaZulu-Natal, Gauteng and the Western Cape.