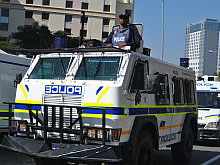 South Africa’s security agencies will do their utmost to ensure fans are protected and the country remains safe during the 2010 Fifa World Cup, the country’s government has promised.

The agencies, which include police and various emergency services, have been ready for some time now, National Police Commissioner Bheki Cele said at a parade in Sandton, Johannesburg, on 17 May. “We are ready to host the World Cup …”

Local and international journalists, many of whom are already stationed here for next month’s tournament, were in Sandton to witness the display of high-tech armoured police and traffic vans, chase helicopters and ambulance fleet to be used during the June-July period.

The display should give overseas reporters a good indication of the country’s security preparations, Cele said. “The international media must tell the world what they see,” he added.

The nation’s expertly trained soldiers also showed off their skills during the parade, as the South African Police Service (SAPS) and the army will work together on various operations during the World Cup.

Government had allocated R1.35-billion (US$179-million) to these two forces to ensure maximum security for the month-long tournament.

As the country counts down the 23 days remaining until kick-off, the display was “a show of strength of all agencies”, Cele said. “Definitely, South Africa is ready. We’re ready to secure all stadiums …”

Some R665-million($88. 2-million) has been spent on World Cup security equipment, which – in addition to the armoured vehicles and helicopters – include sniper rifles, surveillance cameras, advanced bomb-disabling equipment and water cannons.

About 41 000 SAPS officers will be deployed during World Cup operations. The group will consist of 31 000 permanent officers and 10 000 reservists, with a combined budget of R640-million ($85-million).

Police and intelligence officers will also work with Interpol and the Southern African Regional Police Chiefs Cooperation Organisation (SARPCCO). Ronald Noble, Interpol’s secretary-general, announced in April that about 25 of its member countries will supply additional security personnel to South Africa for the World Cup.

While Interpol will provide top-notch intelligence and surveillance equipment, SARPCCO is expected to play a critical role in helping South Africa secure its borders and ensure that people don’t enter the country illegally during June and July.

The remaining 31 teams that have qualified for the World Cup will also send their own security officers to deal with any terrorism or general crime threats.

South African forces have received training in crowd control management from the French National Police Force. Thanks to the leadership and expertise of French General Herve Niel, among others, SAPS members are now well equipped to deal with violent outbreaks.

“The resources that have been put in place and the training will be there to benefit the people South Africa long after the World Cup,” Cele said.

The South African Football Association is satisfied with World Cup security plans, said its CEO Lesley Sedibe. Security of all 32 participating teams will be prioritised, he added. “We’re confident that the security of all the teams is in good hands.”