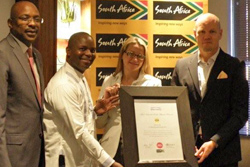 The leading brands are listed by financial valuation in South Africa; they are driving competitiveness and the nation’s reputation. Brand South Africa chief executive officer Miller Matola and Brand Finance Africa chairman Thebe Ikalafeng announced the leaders at a breakfast attended by representatives from some of the companies that make up the Top 10 Most Valuable Brands.

Matola emphasized that the nominated brands had not only contributed to South Africa’s competitiveness but had also built civic pride. South Africans who believed in South Africa ensured the world believed in us, he said. “South African brands are playing a leading role in building the future while adding value for shareholders.”

Brand Finance Africa valuation director Rupert Kemp outlined the Royalty Relief methodology used in the selection, which involved estimating the likely future sales that were attributable to a brand and calculating a royalty rate that would be charged for the use of the brand. This methodology considered three pillars, he said: brand support, for example marketing and distribution; equity; and, brand performance. 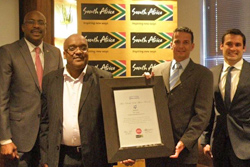 Shoprite had experienced huge expansion and had a presence in 16 countries outside South Africa, he pointed out, while FNB had built a strong brand that emphasized innovation. Woolworths had built its brand on innovation as well as high standards in food and clothing, said Kemp. Nedbank had steadily been growing its brand presence and had for the second time been voted Africa’s Socially Responsible Bank of the Year at the 2013 African Banker Awards.

Kemp said banks on the whole were facing a challenging market exacerbated by up-and-coming newcomers such as Capitec claiming more and more market share. With Barclays increasing its stake in Absa to 62%, the local organisation faced important decisions. Standard Bank came in at number four, top of the banks in South Africa’s Top 50 Brands 2013, after a similarly tough year.

At number three was Sasol, the fuels company, which Kemp said was a sterling achievement for a large B2B player. Innovation and building on trust and reputation were its formula, he said.

South Africa’s two largest cellphone operators share the top two slots, with Vodacom coming in at number two. This was exemplary for a brand which had changed its identity to reflect parent company Vodafone while at the same time holding on to its heritage.

MTN, at number one, was the only South African brand to be placed in the top 500 global brands, said Kemp. The company was constantly expanding and taking on new markets and could be seen to “fly the flag for South Africa in business”.

Matola congratulated the winners, saying they were playing their part in building South Africa. “They are not only building value for shareholders but for the 50 million stakeholders” they had in South Africa. Their contribution would work towards building a great country brand.