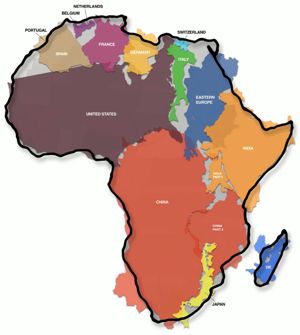 A detail from Kai Krause’s True Size of Africa map. See this map for full details.

Every day, I learn something new from the Internet. Today, it was the true size of Africa.

Although I live on the continent, I am one of the millions who don’t understand just how big it really is. (I obviously never paid attention in Geography class.) This extraordinary map by graphic artist Kai Krause helps give us some idea. Drawn in 2010, the map shows the outlines of other countries fitted into the outline of Africa.

Krause says the map is “a small contribution in the fight against rampant Immappancy” – most of us don’t realise that maps distort in one way or another. Our view of the world has been set by the very familiar Mercator projection map – but while this is useful for maritime travel, it distorts shapes and areas of large land masses – like Africa.

Here Krause resizes countries and continents according to their actual land size in square kilometres. The US, India and China can all fit within the borders of Africa. In fact, they fit in with space to spare for another few countries…