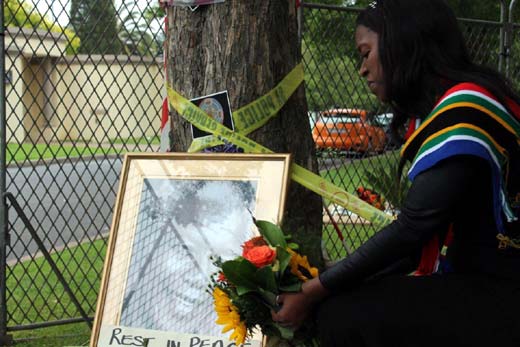 I am immensely privileged to have been born and lived in the same country as Nelson Mandela, to have seen him freed, to have grown in stature under his care, as are we all.

I know that today and over the next few days the ether will be cluttered with tributes from those who knew him, those who didn’t, those who pretended to know him, and the many, many people whose lives he enriched simply by being the man he was.

I never had the privilege of meeting uTata, but I am immensely privileged to have walked Vilikazi Street, the street he lived on, to have touched the wall of his little home, to have passed through the front door he passed through; to have stood on the pavements of downtown Joburg outside the court where he stood, to have sat in the old jail on Constitution Hill where he sat. I am immensely privileged to have stood outside his backyard room in Alex, to have felt the sun on my face as he must have felt.

I am immensely privileged to have sat in the lounge of a friend in Grahamstown and watched him walk out of prison. I am immensely privileged to have stood on the steps of the Cape Town City Hall, to have touched the doorway he walked out of to greet his public; to have stood in his cell on Robben Island, to have looked out of the window he looked out of; to have walked on the dry and dusty earth he walked on.

I am indescribably privileged as a white woman who grew up in upper class South Africa during the apartheid years, going to my hugely posh and expensive school while Mandela toiled on The Island. Here my political awakening started. At my privileged university it continued. And now, in my beautiful country, I can say ‘Thank you and farewell. Travel safely.’

To have lived through these times, to have known these privileges, to be grateful, to know my humanity and the humanity of others – this is a priceless gift he gave me.